On 23 September, the opening ceremony of the hatchery station of the EU project LIFE Sterlet was held on the Danube Island in Vienna. The ICPDR has been one of the first organisations to advocate the protection of this flagship species, raise awareness for the threat to see Danube sturgeons become totally extinct and support projects and initiatives such as LIFE Sterlet. 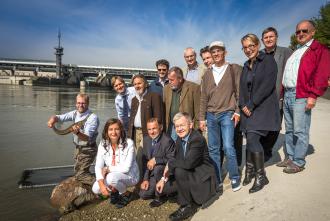 Putting the issues high on its agenda, the ICPDR has been sending the message to the broader public that prospering Danube sturgeons are a sign of a healthy river, an indicator of human impact on aquatic ecosystems and the species they host. The ICPDR Permanent Secretariat in Vienna was represented by its Technical Expert for River Basin Management, Ms. Edith Hödl.

The sterlet (Acipenser ruthenus) is the smallest species of Danube sturgeons. Fully grown, the young sterlet can reach a length of about one meter. A freshwater fish, it used to be at home in the Danube and its tributaries such as the Inn, Morava, Drau, Mur, Sava, Tisza and other Danube feeders such as the Caspian, Black and White Seas. Originally, sterlet population was quite important in the Danube Delta upstream to Ulm and Bavaria in Germany.

Almost extinct in the last century in the upper and middle sections of the Danube river due to overfishing and migration barriers, it is returning to its natural habitat. While sterlets can be found sporadically in the upper Danube, its stock is severely threatened.

Launched in 2016, the transnational project led by the University of Natural Resources and Life Sciences (BOKU) aims until 2021 at strengthening and establishing a healthy, self-sustaining population sturgeon population in different sections of the Danube river. LIFE Sterlet is applying innovative methods for breeding autochthonous sterlets ahead of releasing them in the wild. The target areas for the release are the two free-flowing sections of the Austrian Danube in the Wachau and the Danube National Park regions, the latter including the Morava river at the Austro-Slovak border.

Funded by the European Union with 60% of the project value of the LIFE program, LIFE Sterlet is also funded by other from the field of fisheries, nature conservation and management, among which the ICPDR.