Ice control has a long history on the Danube river. The extremely low temperatures experienced in the past weeks throughout the Danube River basin which have been causing continuous ice formation on the Danube are reminding us of the importance of cross-border cooperation. 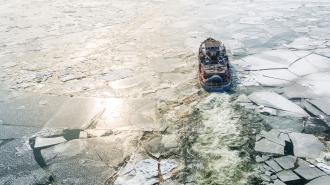 Over the big chill of the past few weeks, about 170 km of Danube were entirely frozen. Ice breakers had to be called from Hungary to help Serbia clear the area of the middle Danube around Belgrade after large chunks of ice formed and sometimes left the entire surface frozen. In some areas, the river froze to a depth that sometimes reached four meters. Other rivers and lakes throughout the region were also covered with ice.

The Danube is one of Europe’s main rivers and a crucial transport route for cargo transport for eastern Europe. Serbian water authorities declared an emergency situation along the stretch of the Danube bordering to Hungary. Two Hungarian ice-breakers were deployed to smash ice blocks jamming parts of the river and prevent damage to bridges and ships moored along the waterway. The vessels were helped by a drone used to observe the area and coordinate the work. Since Serbia has only two ice-breaker, help from neighboring Hungary was mandatory given the situation. Altogether four Hungarian ice-breakers were deployed.

Beyond concerns related to navigation, the risk of flooding is also a looming threat to the population. The large quantities of ice that accumulated could raise water levels and contribute to flooding. In order to ensure that all ice jams are removed, the countries have jointly agreed on deploying Hungarian ice-breakers beyond the shared interest section, on the Serbian section. The task of the reassigned fleet will then be the supervision of the lower section and ice control, ice breaking, and the demolition of jams when necessary.

Ice jam control on the middle Danube is implemented within the framework of a trilateral Hungarian-Serbian-Croatian agreement. In 2012, a major intervention was necessary on the shared Serbian-Croatian Danube section between the Hungarian border and Vukovar (Croatia). Hungary also had a stake in ice breaking as the floods were causing ice jams endangering national territory as well. This operation was already an exemplary illustration of smooth transboundary cooperation. Now, four years later, Serbian, Croatia and Hungary decided to respond again together to the current ice situation and to deploy ice breakers. Hungary plowed through the thick ice to free the river upstream and allow the water to move downstream.