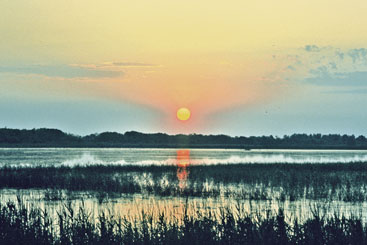 For two decades a vast space at the heart of Europe has been sustained by a legal instrument initiated by eleven countries – including Ukraine. Although only 5% of the territory of Ukraine is in the Danube Basin and this area is home to 3% of the country’s total population, cooperation within ICPDR takes an important place in the priorities of the country.

Under the framework of the ICPDR, Ukraine was able to make a meaningful contribution to the development of the Danube River Basin Analysis (2004) and Danube River Basin Management Plan (2010). During the Ukrainian Presidency of the ICPDR in 2011, substantial progress was achieved in the Danube Delta, the Tisza and the Prut sub-basin initiatives. The Ministerial Meeting in April 2011, held in Uzhgorod, Ukraine, brought together the ministers and high level representatives of the five Tisza River states as well as the European Commission and international environmental organisations to endorse the implementation of the Integrated Tisza River Basin Management Plan. These plans served as pilot projects of the EU Water Framework Directive in Ukraine, which came to be an opportunity to share know-how for other river basins in Ukraine. At present, the national management plan for the Tisza River Basin is a model for the Pivdenny Bug River.

In addition, the continuous and active membership of Ukrainian national experts in ICPDR expert groups has allowed for the advanced training, upgrading of methodologies and capacity building of relevant organisations. As a result, Ukraine now has a number of specialists who work on elaborating river basin management plans for other Ukrainian river basins and initiating the development of new standards and methodologies.

Adding to cultural heritage. Among the many good traditions that have been developed in the ICDPR community is the celebration of the Danube Day, which has had a meaningful impact in Ukraine. Starting from the 70 people who gathered high in the Carpathian Mountains in 2008, it has emerged as a popular and much awaited event for specialists, children and the public at large – last year more than 17,000 people were involved in Danube Day celebrations. Many activities for the Tisza Basin were initiated during Danube Day – such as the installation of memorial plates at the source of the Tisza by the five Tisza countries, river clean-ups for domestic waste and the Danube Day Fish flag, which is still travelling from one Danube country to another.

Last but not the least is the issue of European integration. Ukraine is in the unique position of being both an upstream country of the Danube Basin (as the source of the Tisza and Prut Rivers) and a downstream country (at the mouth of the Danube Delta). It is therefore clear that joint efforts taken to protect these shared water resources is a practical step towards the integration of Ukraine in the European family of the countries.

Next: The ICPDR and its observers: inspiring wider interaction with stakeholders