Milestones on the road to progress 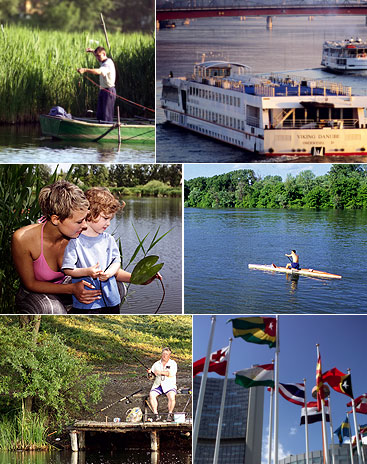 1996: The Trans-National Monitoring Network started operation. Its main objective is to provide a structured and wellbalanced view of pollution and long-term trends in water quality and pollution loads in the major rivers in the Danube River Basin.

1997: The Accident Emergency Warning System began operation. It is activated whenever there is a risk of transboundary water pollution or threshold danger levels of certain hazardous substances are exceeded, and sends out warning messages to countries downstream to help authorities put environmental protection and public safety measures into action.

2000: The ICPDR became the coordination body for implementation of the EU Water Framework Directive and and ten years later of the EU Floods Directive

2001 (2007; 2013): The first Joint Danube Survey launched in 2001 to produce comparable and reliable information on water quality and pollution from a single source and on parameters not covered by regular monitoring. Joint Danube Survey 2 was carried out in 2007 and the Joint Danube Survey 3 in 2013. With sampling at nearly 100 sites on the Danube River throughout ten countries, the JDS3 was the world’s biggest river research expedition.

2004: The first Danube Day was held on 29 June. Danube Day celebrations honour the Danube and the rivers that flow into it, paying tribute to the vital role they play in people's lives. Danube Day also demonstrates the importance of transboundary cooperation in water management and inspires the public to get involved. Since 2004, the annual Danube Day has developed into the biggest river festival in the world.

2004: Ministers for water resource management in the Danube Basin signed a ’Danube Declaration‘ committing to future actions to achieve progress under the Convention. This coincided with the completion of the Danube Basin Analysis in 2004, an essential building block for the EU Water Framework Directive. Also known as the Roof Report 2004, the report included the first comprehensive analysis of the entire river basin and its characteristics, pressures and impacts, an economic analysis and a register of protected areas.

2005: Cooperation with business has been an important part of the ICPDR’s work since development of the Green Danube Partnership between the ICPDR, the Coca-Cola Company and its largest European bottler Coca-Cola Hellenic Bottling Company.

In 2006, this partnership developed the Danube Box, a comprehensive teaching kit giving schoolchildren a greater understanding of the river basin, the threats facing the river and the need to preserve water resources. To date, eight language versions have been produced and it has inspired similar projects for the Black Sea region.

2007: The ICPDR's outstanding achievement in river restoration and management was recognised with the award of the International Thiess Riverprize – the most significant and valuable prize in the field worldwide, worth AU $300,000 (approximately EUR 179,000).

2008: Cooperation between the environment and navigation sectors – led by the ICPDR, the Danube Commission on Navigation and the International Commission for the Sava River Basin – resulted in the Joint Statement on Inland Navigation and Environmental Protection in the Danube River Basin. The statement serves as a basis for ensuring that environmental concerns are included in projects to improve navigation – without conflict.

2009: The first Danube River Basin Management Plan was produced. The plan for the basin demonstrated an innovative approach to basin-wide issues by addressing pressures and impacts in the region in a Joint Programme of Measures. It identified four significant water management issues: organic pollution, nutrient pollution, hazardous substances pollution and hydromorphological alterations, as well as transboundary groundwater issues. The Danube River Basin Management Plan and its Joint Programme of Measures serves as a road map to guide actions to meet the requirements of the EU Water Framework Directive in 2015 and beyond.

2013: Major progress was made on issues that call for inter-sectoral approaches and policies, culminating in the publication of a Climate Change Adaptation Strategy and Guiding Principles for Sustainable Hydropower Development for the Danube Basin.