ICPDR Presidency 2014:
continuity, coherence and cooperation from the Black Forest to the Black Sea

For the 20th anniversary of the signing of the Danube River Protection Convention, the ICPDR Presidency returns to Sofia where the Danube lies at the heart of Bulgarian geography and history. 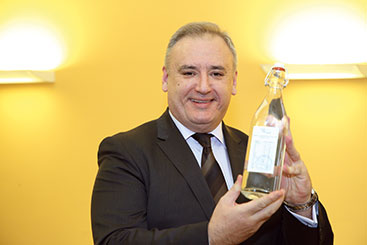 Atanas Kostadinov, Deputy Minister of the Environment and Water of Bulgaria, will serve as President of the ICPDR for the organisation’s 20 year anniversary.
Credit: ICPDR/Schedl

Atanas Kostadinov, Deputy Minister of Environment and Water and ICPDR President for 2014, speaks about strengthening cooperation with the Black Sea Commission and how, at 20 years old, the ICPDR is out of its youth and taking its place as a mature player on the international stage.

Danube Watch: What is the Danube’s role for Bulgaria?

Kostadinov: Bulgaria is a country of rich history, astonishing heritage from Thracian and Roman times, a land where over 13 centuries ago ancient Bulgarians founded their state south of the Danube River. The Danube is not only part of our geography and history – the words “the blue Danube” feature in the second line of the national anthem and the river is an element of national identity.

As for myself, I was born in the Danube River Basin. Though not on the banks of the Danube River itself, Sofia is situated in the catchment of its largest tributary in Bulgaria – the Iskar River.

My current responsibilities as Deputy Minister of Environment and Water include water management issues of policy making and implementation. The Bulgarian part of the Danube River covers nearly half of Bulgaria’s territory but this is not the sole reason for having a clear national focus on the water management of this basin. For centuries the Danube has been the Bulgarian bond with Europe and the sense of belonging to the Danube family is alive and being further strengthened by ICPDR activities.

Danube Watch: What will this anniversary year mean for the presidency?

Kostadinov: First of all, 2014 is the 20th anniversary of the Danube River Protection Convention. In a human life, 20 years mark the end of childhood and the beginning of a responsible and productive period. Indeed, utilising the potential and vibrant energy of youth, we can now be more responsible when strategic issues are being considered and be more open-minded and forward looking in this process.

Taking stock from achievements so far and the processes leading to them, I believe that the Standing Working Group meeting this June in Sofia will outline priorities in view of the dynamic changes and ever increasing challenges to water management. I hope that with the support of the Troika with the former and future Presidents and of all Heads of Delegations we will have a more consolidated ICPDR family by the end of this year.
This year also marks a decade of Danube Day celebrations. This outreach initiative has contributed significantly to raising the ICPDR’s profile and has gained a lot of support for the region among a wide range of stakeholders. In Bulgaria, Danube Day activities this year will have an additional boost by a clean up campaign along the Danube River.

The diversity of the Danube River Basin offers numerous possibilities for a wide range of activities on regional scale. The implementation of the EU Strategy for the Danube Region is definitely a process with a lot of links to the ICPDR’s core business. Streamlining these activities with a clear distinction of responsibilities in order to avoid overlaps can only be beneficial to both the Strategy and the ICPDR. A process of communication on this issue has already started and I hope to achieve progress during the Bulgarian Presidency of the ICPDR with the view of having a document on agreed responsibilities of these two framework structures.

Atanas Kostadinov was born in 1968.
He has a Master’s degree in Philosophy and Sociology from Sofia University “St. Kliment Ohridski” and a specialisation from Harvard University.
He served as Deputy Minister of Environment and Water from 2005 to 2009. After 2011 he managed consultant and investment companies.
Kostadinov speaks Bulgarian, English, Russian and German.

Danube Watch: Bulgaria is both a Danube and Black Sea country, and next year Bulgaria will also chair the Black Sea Commission. How will you strengthen the cooperation between the two commissions?

Kostadinov: Contributing to the protection of the Black Sea is among the key objectives of the Danube River Protection Convention. This focus on the Black Sea in recent years is even more prominent given that with the accession of Bulgaria and Romania to the EU the Black Sea has become one of the European Union seas. There are signs of improvement in cooperation between the ICPDR and the Black Sea Commission and my ambition as ICPDR President from a Danube and Black Sea country is to see this cooperation strengthen and expand. And I am clearly speaking about two way communication, as naturally data on pollution loads from the Danube is important for Black Sea countries, but relevant information about impacts and measures from the Black Sea Commission is important for the Danube countries.

I would like to see a revived Danube–Black Sea Joint Technical Working Group, based on a work programme accepted by the two commissions and closer working relationships between the secretariats and at an expert level. Bulgaria is going to strengthen its own participation in this group and promote cooperation between the two commissions during its Black Sea Commission chairmanship, including promoting new formats of collaboration involving both secretariats and the ICPDR President and the Black Sea Commission Chairman.

Danube Watch: How has Bulgaria benefitted from the ICPDR, and what can other countries or regions learn from the work of the ICPDR?

Kostadinov: To a certain extent, it is symbolic that in the anniversary year the Convention is back to Sofia. It was also under the first Bulgarian Presidency that the decision was taken for the ICPDR to serve as a platform for WFD coordination in the Danube River Basin. At the time, Bulgaria – as well as most of the current EU Member States which are parties to the Danube River Protection Convention – was not bound by EU legislation. However, this decision and its subsequent implementation has provided us with a unique experience and contributed greatly to the capacity building of our water administration. What is more, the experience developing the first Danube River Basin District Management Plan was useful for all four river basin districts in Bulgaria.

Valuable experience from ICPDR approaches to intersectoral cooperation and public participation have also been incorporated at the national level and in our international activities. Bulgaria has often brought the ICPDR’s example to Black Sea Commission discussions, to the extent that these days in this setting it is not uncommon to receive the question: “How do you do this in the ICPDR?”

Last but not least, the ICPDR has helped Bulgaria, as well as all Danube countries, to build a Danubian culture – one of mutual respect, commitment and friendship.

Next: Targets for all Danube countries to meet: implementing EU legislation