The flow of Danube cooperation:
a history of shared responsibility

Water knows no borders, but is instead shared by diverse communities across political, religious and cultural lines. Regional cooperation – as demonstrated by the Danube countries over the last 20 years under the Danube River Protection Convention – is therefore vital to avoid conflict. 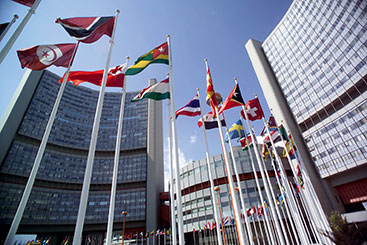 As a corridor, the Danube links the Black Sea with the heart of Europe. As a natural barrier, it has divided countries and nations. For millennia, the Danube oscillated between these two roles, pulling together and pushing apart, thereby shaping the history of dozens of nations. The most international river basin in the world has long called for transboundary cooperation. The ICPDR’s 20 years of work for the Danube environment add a success story to a centuries’ old effort to share responsibility for joint waters.

Early river agreements. The Danube Basin is at the centre of ancient fault lines between blocks of power – from the Roman Empire to struggles between the Habsburg, Ottoman and Russian Empires and between Capitalist West and Communist East. Water, however, doesn’t recognize these borders; instead it is shared by a variety of political and administrative regimes and requires cooperation. As a result, water is a powerful force to promote transboundary partnership, even – or perhaps especially – in areas prone to conflict.

As early as 1616, the Danube was a keystone in negotiating peace. An Austro-Turkish treaty signed in Belgrade that year granted Austrians the right to navigate the middle and lower Danube, at that time under the control of the Ottoman Empire. In 1774, the Treaty of Küçük Kaynarca ended a war between Russia and Turkey, and allowed the Russians to use the lower Danube.

However it was the 1856 Treaty of Paris, settling the Crimean War, that created the first – and for many years the only – international body with significant powers on the Danube River. The ‘European Commission of the Danube’, as it was called – made up of riverine countries as well as the major shipping powers such as Great Britain and France – was set up to guarantee freedom of commerce and navigation along the Danube River for all European countries. Cooperation under this commission continued until the middle of the 20th century.

Bringing the basin together. The Danube passes by numerous large cities – including four national capitals, Vienna, Bratislava, Budapest and Belgrade – receiving the waste of millions of individuals and their agriculture and industry, and by the 1980s water quality was a serious issue. Recognising the increasing degradation of water quality, the eight (at that time) countries along the Danube River signed the Declaration of the Danube Countries to Cooperate on Questions Concerning the Water Management of the Danube (Bucharest Declaration) in 1985.

The Bucharest Declaration reinforced the principle that the environmental quality of the river depends on the environment of the basin as a whole, and committed the countries to an integrated approach in water management, beginning with the establishment of a basin-wide unified monitoring network.

The East–West political division of the Cold War had cut the Danube Basin in two and severely constrained information sharing and transnational data exchange. In 1998, the fall of the Iron Curtain transformed geopolitical conditions on a global scale with new countries and new frontiers through Europe. However the breakup of the USSR made existing water quality problems worse, as new economies found few resources for environmental issues.

Initial steps to river protection. The Bucharest Declaration announced the Danube countries’ intentions to cooperate on water management, and by the early 1990s action to formalise that cooperation was already under way. In 1991, the countries created the Environmental Programme for the Danube River Basin (EPDRB) to support and reinforce national actions to restore and protect the river basin. Under the programme, the countries agreed to adopt the same monitoring system to assess environmental impact, address the issue of liability for cross-border pollution, define rules for the protection of wetland habitats and to define guidelines to conserve areas of ecological importance or aesthetic value.

One of the major assignments of the Task Force was the development of the Strategic Action Plan in 1993 to take steps from the planning phase to implementation. The plan addressed major environmental threats with realistic actions and constraints to problem solving, and was updated regularly with input from consultation with decision-makers and stakeholders. Furthermore,
it was the first time that public participation was required during the development of an international management plan, embracing the vital need for input at all levels in order for the plan to ensure that it has the support of the people who are affected by its implementation.

A MODEL FOR TRANSBOUNDARY AGREEMENTS

The UNECE Water Convention was adopted in Helsinki in 1992 and entered into force in 1996. To date it has been ratified by 56 countries and the European Community.

The Convention’s aim is to strengthen measures at local, national and transboundary levels to protect and ensure the quantity, quality and sustainable use of transboundary water resources – both surface waters and ground waters. The Convention takes a holistic approach, based on the understanding that water resources play an integral part in ecosystems as well as in human societies and economies.

Since the UNECE Water Convention came into force it has served as a model for transboundary cooperation arrangements and driven cooperation in the region. Many river basin agreements are based on the Convention, such as the Danube River Protection Convention, the agreements on Lake Peipsi and on the Sava, Meuse, Rhine and Scheldt Rivers, or further to the east the bilateral agreements between countries in Eastern Europe established since the 1990s, among them the Kazakh–Russian, Russian–Ukrainian and Moldovan–Ukrainian agreements. Building on the success achieved, the Parties to the Convention amended it in 2013 to open it up to non-UNECE countries, thereby making the Convention and its intergovernmental framework available to all regions of the world.

A legal framework for Danube cooperation. At the same time they were developing the Strategic Action Plan, the Danube countries were also developing the Convention on Cooperation for the Protection and Sustainable Use of the Danube River (Danube River Protection Convention). The Convention was signed on 29 June, 1994 in Sofia, Bulgaria, by representatives from eleven of the Danube Basin States – Austria, Bulgaria, Croatia, the Czech Republic, Germany, Hungary, Moldova, Romania, Slovakia, Slovenia and Ukraine, as well as the European Community. Serbia, then in union with Montenegro, joined the adopted the Convention in 2003, Bosnia and Herzegovina in 2005. After seceding from Serbia, Montenegro became the 15th contracting party of the ICPDR in 2008.

Signatories to the Convention have agreed to cooperate on fundamental water management issues, including the conservation, improvement and rational use of surface waters and groundwater; preventive measures to control hazards originating from accidents, floods, ice or hazardous substances; and measures to reduce the pollution loads entering the Black Sea from sources in the Danube River Basin.

Following the signing of the Danube River Protection Convention, the UN Office Vienna became the centre for the administration of Danube protection efforts with the establishment of the ICPDR Secretariat there in 1998.
© ICPDR/Mello

Leading the region for water management. The ICPDR is now the largest international body of river basin management experts in Europe, with a mission to promote and coordinate sustainable water management for the benefit of all people of the Danube River Basin. Since its creation, the ICPDR has brought together representatives from the highest ministerial levels, technical experts and members of civil society and the scientific community to continuously improve the state of the Danube River Basin water bodies.

This commitment was reinforced in 2000, when all ICPDR contracting parties agreed to coordinate the implementation of the EU Water Framework Directive in the Danube Basin through the ICPDR; and again in 2007, when this agreement was extended to the EU Floods Directive (see article, page 10).

The ongoing goal of the ICPDR will be to implement the Danube River Protection Convention and make it a living tool to coordinate sustainable and equitable water management, including conservation, improvement and rational use of waters for the benefit of the Danube River Basin countries and their people for the next twenty years, and the years to follow.

Next: ICPDR Presidency 2014: continuity, coherence and cooperation from the Black Forest to the Black Sea