The involvement of stakeholders has always been a vital aspect of the work of the ICPDR. Recently, however, the drive to expand this involvement even further has been placed front and centre. To this end, numerous projects organised and executed by partner organisations along with the ICPDR have contained a heavy emphasis on stakeholder involvement. This was done, for example, through workshops that supported the transfer of knowledge to key target groups throughout the Danube River Basin, including in the fields of hydropower, navigation, flood risk management and river basin management, including ecology. These target groups were also involved in the development of the project results, such as within the framework of national events.

O ne such example of this stakeholder involvement-focused concept has recently been completed under the auspices of the DanubeSediment project. The ICPDR identified sediment regime change in the Danube River as an issue more than a decade ago. Sediment is a natural part of aquatic systems. Over the centuries, humans have strongly altered the Danube River, with riverbed straightening, hydropower dams and dikes have led to significant changes in the sediment load. The resulting sediment imbalance contributes to flood risks, reduces navigation possibilities and hydropower production. It also, importantly, leads to the loss of biodiversity within the Danube Basin.

Because the Danube flows through ten counties, a transnational project on sediment management was needed to put together a full and thorough picture of the issue at hand. In order to best tackle this issue, improvements to sediment and water management as well as the morphology of the Danube River need to be undertaken. Nearly four years ago, 14 project partners and 14 strategic partners came together within the DanubeSediment project to accomplish this goal. The DanubeSediment project also brought together a number of sectoral actors, higher education institutions, hydropower companies, international organisations and non-governmental organisations from nine Danube River

Strengthening Stakeholder Involvement One main project output is the Danube Sediment Management Guidance, or DSMG 1. It contains recommendations for reducing the impact of a disturbed sediment balance. As an example, this could apply to the impact on the ecological status and on flood risk along the river. Vitally, by feeding into the Danube River Management Plan (DRBMP) and the Danube Flood Risk Management Plan (DFRMP)published by the ICPDR, the project makes a direct contribution to transnational water management and flood risk prevention. It is also worth noting that Sediment Balance Alteration became a (sub) SWMI (Significant Water Management Issue) in the 2021 Update of the DRBMP.

To further the acceptance of any sediment-related management measure, all relevant stakeholders should be included in the planning phase. With their expertise, the feasibility of a measure can be analysed and adopted to site-specific conditions. With this in mind, stakeholder workshops were implemented at different stages of the project as well as personal consultations with the project partners. These supported the transfer of knowledge to key target groups throughout the Danube River Basin including the hydropower and navigation industries, waterway authorities, environmental organisations (e.g., national parks), NGOs, the scientific community and flood risk and river basin management groups, which includes ecology experts. 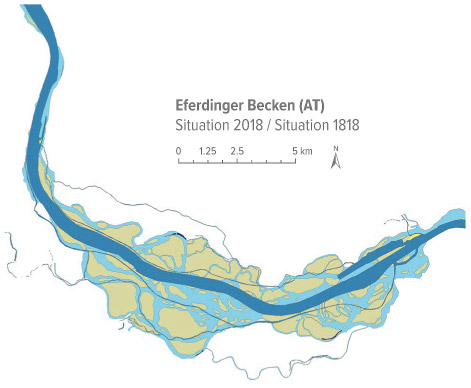 These target groups were also involved in the development of the project results, such as within the frame of national events. The project also specifically addresses the key target groups and their roles in its second major output: The Sediment Manual for Stakeholders or SMS 2. The SMS offers assistance for sediment-related actions in the Danube River Basin and for future programmes of sediment-related measures. The document also provides background information and concrete examples for implementing good practice measures within each field which can support decision-makers and practitioners in planning future sediment management measures. The DSMG and SMS can form the basis for a potential follow-up project on a concretisation of sediment management by e.g., pilot measures. The project also created two videos and interactive maps to aid in the visualisation of these project results and recommendations.

Upon the recent completion of the sediment project and the subsequent Sediment Manual for Stakeholders, the DanubeSediment team transferred its stakeholder contact list to the ICPDR. This contact list has already been incorporated into ICPDR's existing stakeholders list and will allow the ICPDR to better expand and deepen its mission of stakeholder involvement in projects in all areas that concern the well-being of the Danube River Basin. 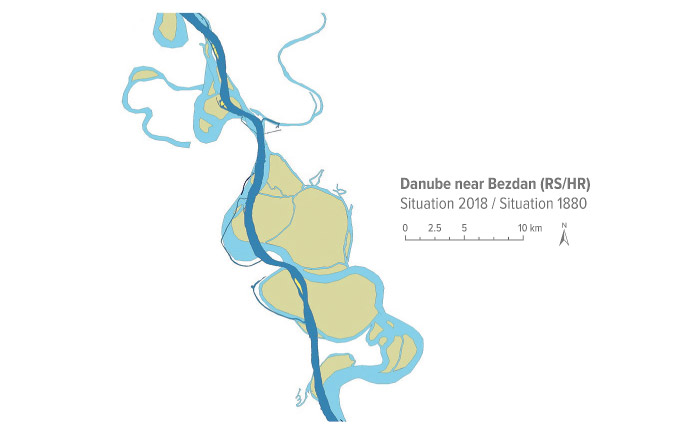 The Project
In order to better understand the risks and impacts of sediment surplus and deficit, the project analysed the most important drivers and pressures causing alterations to the balance of sediment. Based on data collected by the project team, a sediment balance was created that analysed the sinks, sources and redistribution of sediment within the Danube. Based on a comparison of the various monitoring methods and instruments that were used to collect sediment data by numerous Member States, the project was able to recommend the establishment of a harmonised quantity monitoring network, the setting up of new monitoring stations and the creation of a centralised data storage location. 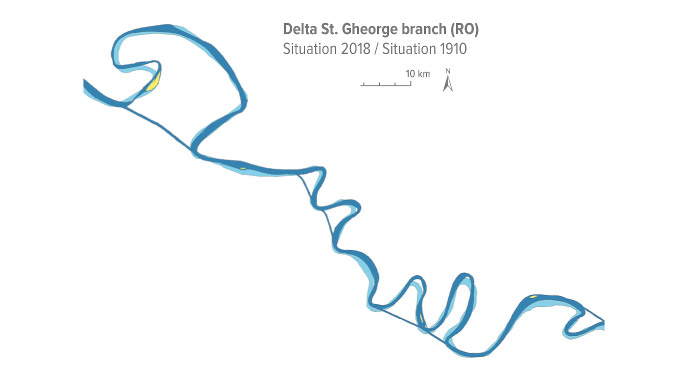 Overall, the project results confirmed the assumption that there is a tendency toward sedimentation in the impoundments when the river is dammed, while erosion mainly occurs in free-flowing river sections. One result of the sediment regime analysis was the observation that since the construction of major hydropower plants, the (suspended) sediment transport decreased at the Danube itself but also at the tributaries due to sedimentation in reservoirs and impoundments (together with a bedload continuity interruption) leading to riverbed erosion in the free-flowing sections. The total suspended sediment input to the Danube Delta and the Black Sea decreased by more than 60%. This means that the suspended sediment load decreased from previous amounts of about 40-60 megatons per year to approximately 15-20 megatons per year currently, contributing to coastal erosion of up to 24 m per year.

To calculate the entire sediment balance of the Danube, the project partners also analysed bathymetrical data, bed material as well as dredging and feeding. In total, about 733 river kilometres (29%) of river length analysed is dominated by erosion. In the Lower Danube, 670 kilometres (27%) show a trend toward erosion, however, a lack of data hinders any detailed analysis, meaning that local sedimentation may exist in stretches of general riverbed erosion. When this is added up, more than half of the Danube River shows a tendency toward erosion, while 857 river kilometres (34%) are dominated by sedimentation, especially upstream from the major hydropower plants Aschach, Gabčíkovo and Iron Gate I. Only around 10% of the analysed river stretch (i.e., 241 kilometres) show a dynamic balance between sedimentation and erosion respectively no significant changes occurring.

Authors: Sabina Bokal, Senior Project Coordinator at the Global Water Partnership Central and Eastern Europe. Coming from Slovenia, passionate about water and the environment. She has been part of the GWP CEE team for the past 7 years, working on projects related to IWRM, climate change, natural based solutions and transboundary cooperation.