An innovative project is being undertaken by the City of Vienna to increase the diversity of underwater plants in the Alte Donau (Old Danube), a recreational waterbody in Vienna that was once the main channel of the mighty Danube River.

L ike many other waterbodies around the Danube in Vienna, the Old Danube is dominated by one species of underwater plant: the spiked water-milfoil. If you have ever swam in or boated on the Old Danube in summer, you will probably have come into contact with it. Spiked water-milfoil is a tall, fast-growing underwater plant with long, grass-like stems.

This plant grows to a substantial height and, when left alone, will reach and cover the surface of the water in the summer months. This causes problems for swimmers, boaters and anyone else partaking in leisure or sports activities. Additionally, this invasive species crowds out other species of underwater plants by blocking sunlight from reaching the lower depths of the waters.

The Public Participation Expert Group (PP EG) is the ICPDR expert group dedicated to supporting ICPDR activities related to communication and participation issues. These include public consultation measures for the Danube River Basin Management and Flood Risk Management Plans, publications and outreach initiatives such as Danube Day and environmental education.

The City of Vienna, Department MA 45 - Water Management manages spiked water-milfoil in and around the city by cutting it back on a regular basis during the summer months, using boats specially designed for the purpose. These small, boats work on the same basis as the lawnmower used to cut the grass in gardens and parks and is capable of manoeuvering into difficult spaces to collect the cuttings for removal. The milfoil is cut back in popular areas to a height of 2.5. meters below the surface to prevents the plant from interfering with recreational activities. The cuttings are then collected and turned into organic compost that is made available to the public at waste collection and recycling centres around Vienna. Cutting back, rather than removal, is preferred because the plant helps to balance nutrients and keep the waters of the Danube clean and oxygenated. 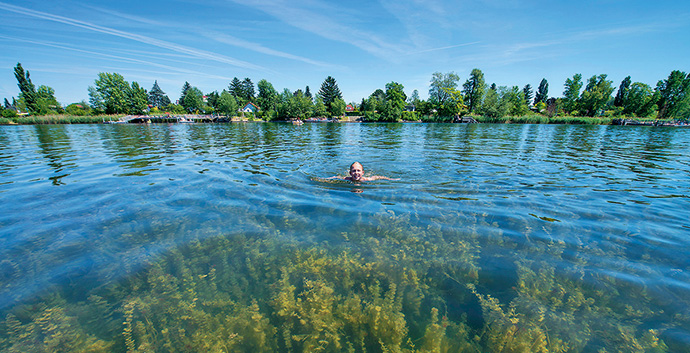 The Old Danube is popular for swimming, boating, and other recreational activities. The project is reintroducing alternative species of underwater plants native to it by planting them on the lake bed and providing temporary protection that enable the plants to thrive. The rapidly-growing millfoil covers the surface of the water and therefore needs to be cut back regularly.

Controlling this somewhat troublesome plant is expensive and requires substantial manpower and resources. For this reason, the City of Vienna has started an initiative to reintroduce a less problematic species of plant to the Old Danube. In spring 2017, divers planted seven low-growing stonewort species of underwater plant on a surface covering 2.5 hectare of the lake floor. Stoneworts are native to the Danube region and were once the dominant plant in the Old Danube. The bed is protected from grazing fish by a net, but the area can still be used by swimmers and boaters. The protective net will be removed in 2020 and it is hoped that the stonewort species will once again thrive and eventually cover a substantially larger area of the lake bed in the Old Danube.

The proliferation of the stonewort species will provide several important benefits. First, ecological diversity generally makes an area more resistant to environmental pressures and changes. For example, if the water quality is altered and the lake or its parts become inhospitable to spiked water milfoil, the existence of other species could be critical in ensuring the continuation of necessary biological and ecological functions. Moreover, stoneworts are low growing plants that could provide the benefits of submerged plants without the inconvenience of having to carry out expensive and time-consuming management and maintenance measures.

Danube Watch: Where did the idea for the project come from?

When the water quality improved again after the remediation of the Old Danube, the tall spikewort (Myriophyllum spicatum) became particularly dominant, while the characeae practically disappeared. In the still cloudy water, the spikewort had the advantage of being able to grow closer to the surface and thus to the light.

The strong and rapid growth-rate of high-growing species in the flat areas of the Old Danube was extremely detrimental to recreational use, which is why attempts were soon made to plant low-growing characea, otherwise known as stonewort. It turned out that although the characeae grow very well, they are quickly eaten by fish while they are still in the small growth stage. It therefore became obvious that larger areas needed to be planted that were protected from fish.

Danube Watch: How did you first get involved in the project?

I was involved in the planting project as project manager of the five-year EU LIFE project for the Old Danube, which has since been completed. This project aimed to improve the resilience of the Old Danube to the ever-increasing pressures of usage and other stress factors. Amongst other things, a strategy to ensure the biodiversity of aquatic vegetation and the promotion of low-growing underwater plants was developed in order to reduce the need for the regular, long-term cutting back (mowing) of spikewort. The opportunity presented itself to create an area with characeae that was large enough to withstand feeding pressures from fish. In 2017, a large area on the Lower Old Danube (near Strombucht) was planted with low-growing Characean species.

Danube Watch: Where did the plants come from? Did you harvest them from elsewhere in the Danube?

The plants come from a rearing pond owned by a contractor for the City of Vienna that already has a lot of experience in this area. Only those species were used which had proved their worth in the run-up to the trial planting in the lake. This company was also responsible for providing divers for planting the new species on the bed of the lake.

Danube Watch: Was the project monitored throughout 2018 and what have been the results?

Yes, regular diving activities have taken place to inspect the site and document the development of the plants. The results are extremely positive: the characeae have developed very well and are forming extensive cover on the lake bed. During the course of the diving, small care measures are also undertaken, such as the removal of milfoil plants found to be growing between the characeen.

The planting measures in the Old Danube are to be expanded. This is a waterbody with an area of 150 ha, yet so far only 2.5 ha have been planted. Even if the characeen continue to spread independently throughout the lake, as is hoped, there is still much to do here. Concrete plans for planting stoneworts in other waterbodies belonging to the City of Vienna do not currently exist.

Danube Watch: Is there an aspect of the project you find particularly interesting?

It was very interesting that the experiments showed that certain fish species, especially rudd (Scardinius erythrophthalmus), feed oncharaceae quite deliberately, a fact that we were previously unaware of. This has also led to the need to keep the stock of herbivorous fish species in the planting area as low as possible.

Danube Watch: Are there important partners that you would like to acknowledge or thank for helping?

Special thanks go to the Austrian Fisheries Society, which supported the action as a fishing tenant of the Old Danube and actively supported the measures.

Robert Ives,
is a freelance journalist and translator who also works as a lecturer at the University of Vienna. He is the editor of Danube Watch

Eric Arbizo,
is a practicing lawyer in New York passionate about the Danube River.