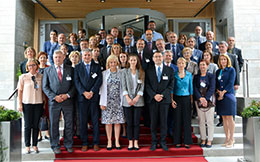 The seventh Meeting of the Parties to the Framework Agreement on the Sava River Basin (FASRB) was held on June 7 2018 in Bled, Slovenia. The meeting was attended by representatives from Bosnia and Herzegovina, Croatia, Serbia and Slovenia, along with representatives from international organisations and institutions including UNECE, UNESCO, UNDP, the Danube Commission, ICPDR, World Bank, IOW, GWP-CEE and EURONATUR, and the President of the Sava Youth Parliament.

The key objective of the meeting was to review the status of implementation of the FASRB, as well as the key challenges ahead. Issues discussed included cooperation in the fields of river basin management, flood risk management, rehabilitation of navigation and the exchange of basin-relevant information. Particular attention was given to issues of sustainable development, along with the guidance provided for further cooperation within the framework of the International Sava River Basin Commission (ISRBC).

In the field of sustainable water management, all parties reaffirmed their commitment to continuing the implementation of the Programme of Measures from the 1st Sava River Basin Management Plan and acknowledged efforts already made in the 2nd cycle of river basin management planning. Satisfaction was expressed concerning progress concerning the establishment of the Flood Forecasting and Warning System for the Sava River Basin and the development of a joint Flood Risk Management Plan.

The meeting also saw all Parties reconfirm their commitment to the development of sustainable, environmentally friendly navigation on the Sava River and its navigable tributaries in accordance with the “Joint Statement on Guiding Principles on the Development of Inland Navigation and Environmental Protection in the Danube River Basin”. The importance of enhanced navigation as a means of stimulating further economic and social development in the region was also stressed.

Other important issues addressed at the meeting included:

An exhibition was held during the meeting showing over 350 photographs chosen from the photo competition “Sava River Basin – Nature for Waters” conducted by the Sava Commission as part of Sava River Day 2018. The photos emphasised the richness of nature, biodiversity and the lives of people in the Sava River basin.

At the end of the meeting, all parties to the FASRB adopted a joint Declaration. The Meeting of the Parties to the FASRB takes place every two years and the next, and eighth, meeting will be held in Bosnia and Herzegovina in 2020.

What is FASRB?
The Meeting of the Parties is held at least once every two years with the aim of reviewing the work and actions of the Sava Commission. Decisions are made based on the proposals and recommendations of the Commission.

The Framework Agreement on the Sava River Basin (FASRB) was signed on 3 December 2002 and came into force on 29 December 2004. It was the first international agreement between the countries in the basin and the signatory states are Bosnia and Herzegovina, Croatia, Slovenia and Serbia. The objective of the agreement is the establishment of an international navigation regime, sustainable water management, protection from the harmful effects of water and conservation measures to protect the region’s ecosystems.

The International Sava River Basin Commission (ISRBC or Sava Commission) is based in Zagreb and is the international body charged with the implementation of FASRB. The Meeting of the Parties to the FASRB is seen as an important opportunity to strengthen the role of the Sava Commission in the development of regional cooperation among the Sava countries and to recognise their joint interests and support them in achieving their goals.

Next: Danube Watch 2/2018 - Volunteers for People in Distress – the Federal Agency for Technical Relief (THW)