Flagship Species of the Danube –
Will There be Sturgeons in the Future?

Sturgeons are living fossils. Documented to have existed for over 200 million years, they developed a unique set of traits; living up to 200 years, maturing late, and growing to impressive sizes of up to 7 metres. Spending most of their lives in marine waters while reproducing in freshwater allowed them to establish large populations that could not be sustained in freshwater alone. This anadromous migration of up to 2,500km in the rivers to spawn re-occurs throughout their long lives in intervals of 2-5 years.

T he Danube hosted six species in the past and as such had the largest diversity of sturgeons of any river worldwide. This diversity, in conjunction with the population sizes, also reflects the past ability of the Danube to provide a healthy and varied habitat.

Historically, sturgeons were an important resource for the inhabitants along the Danube. When no dams hindered the migration of the species, they ranged from the Delta of the Danube to the headwaters Bavaria. Since these times, sturgeons have been caught in the river. But, even the first intensification of their harvest in the 16th century through the use of fences and traps already resulted in the decline of long-distance migrants. The next stage of decline started when flood protection measures restricted the once braided and meandering river to a single channel. These alterations, in combination with dykes and the subsequent navigation development associated with bed fixation and trough-like channel design, reduced habitat diversity even further. Damming mainly for hydropower also transformed the once living river into a regulated water supply system. These interventions have resulted in fatal consequences for the ecosystems and their inhabitants. In the Danube, the past wealth of sturgeon species and their huge populations have been diminished to a few survivors that suffer continuous decline through poaching.

This development is exemplified by the fate of the ship sturgeon (A. nudiventris), a potamodromous freshwater fish in the Danube, with only three known sightings during the first decade of this century it is now considered functionally extinct. The anadromous European Sturgeon (Acipenser sturio), once present in the Lower Danube, has also gone extinct in the Danube River Basin. Of the most abundant long distance migrants, the Russian Sturgeon (A. gueldenstaedtii), is considered to be on the verge of extinction, with nearly all recent catches stemming from restocking actions and no known natural reproduction having been documented in the Lower Danube for several years. In contrast, Beluga Sturgeon (Huso huso) and Stellate Sturgeon (A. stellatus) still reproduce in the Lower Danube in small numbers. However, these small remnant stocks are under constant pressure from poaching in the Danube and Black Sea while at the same time suffering from continued habitat loss due to recent navigation development. The potamodromous Sterlet (A. ruthenus) is still present in most of the main stem of the Danube. However, the populations are fragmented by dams, and show low reproductive success while removal by angling and fisheries continues in large areas of its range.

In a summary, characteristics of their biology, with the resulting need for proactive support and management over extended periods of time, render them ambassadors for a living and lively Danube. Whatever measures support the sturgeons will also benefit the other river fish communities of the Danube.

Persisting threats
Although fishing bans are in place in the Lower Danube countries, their implementation remains a problem as poaching still persists and enforcement is insufficient. More alarming are recent attempts to lift the existing fishing bans, despite the critical state of the populations. 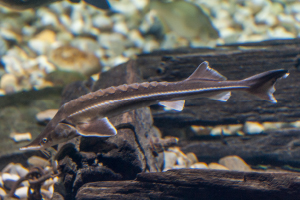 The future of Europe’s last functional sturgeon populations is at stake! Compared to historic levels, today’s catches of a few fish are a mere fraction of the past abundance and clearly show how far the species have declined. This decline bears two major risks: First, the loss of genetic diversity and thus the adaptability of the remaining populations, including the loss of the various sub-populations that utilise different spawning sites varying distances from the river mouth by migrating at different times and utilising different nutrient resources. The more narrow the genetic bandwidth, the higher the risk that future catastrophes, such as increased water temperatures, changes in the food chain or changes in discharge, could eradicate the populations, simply because its flexibility will be insufficient to adapt in time. Secondly, with declining population sizes, the risk that the fish will not find a suitable mating partner can lead to catastrophic failures in reproduction.

The development of the "Pan-European Action Plan for Stugeons" under the Bern Convention acts as an example of a multinational approach, taking into account the similarities of the challenges sturgeon recovery faces throughout Europe. This plan serves as a framework to harmonise national and regional activities. It envisages collaboration and exchange between macro-regions in their efforts to save these charismatic species.

If the recovery of the populations becomes truly successful, the long term target could be a defined harvest at sustainable levels. For the populations to become self-sustaining in numbers that allow such harvests, time and effort have to be invested. Model calculations show that recovery of long-living species like sturgeons can easily take half a century even under optimal conditions. The smaller the initial population and the more habitat destruction has taken place, the higher the effort to counteract the mistakes of the past. Until such a time, effective protection, both in situ and ex situ, in conjunction with support of the populations will be the only means to guarantee their survival. Looking at the disastrous loss of biodiversity on a global scale, it is our responsibility to let the giants of the Danube fulfill their biological fate and recover their populations, not to become corpses on a table but to serve their role in the ecosystem and as ambassadors for a living and interconnected Danube! Joint action and collaboration are urgently needed to reach this goal! 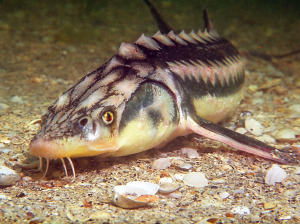 Although recovery plans have been in place for a long time, they were never fully implemented on a transnational level.

Instead, efforts have been limited in scope- though productive and adding important information for future projects. What has been shown is that protecting the future of these species requires utilising multifaceted, multidiciplinary approaches on multinational and multiregional levels to cope with the complexity of both the problem at hand and the potential solutions. The steady, incremental progress so far has included fishing bans, genetic population assessments and monitoring, as well as the improved understanding of the situation. The most important prerequisite for success has been and remains multilateral cooperation, whether political, scientific, or economic.

Jörn Gessner,
is a senior scientist in the departments of Biology and ecology of fish and Ecophysiology and Aquaculture at the Leibnitz Institute for Freshwater Ecology and Inland Fisheries in Berlin, Germany.

Thomas Hein,
is head of the Institute of Hydrobiology and Aquatic Ecosystem Management at the University of Natural Resources and Life Sciences in Vienna, Austria.

Thomas Friedrich,
is a scientific staff member at the Institute of Hydrobiology and Aquatic Ecosystem Management at the University of Natural Resources and Life Sciences in Vienna, Austria.