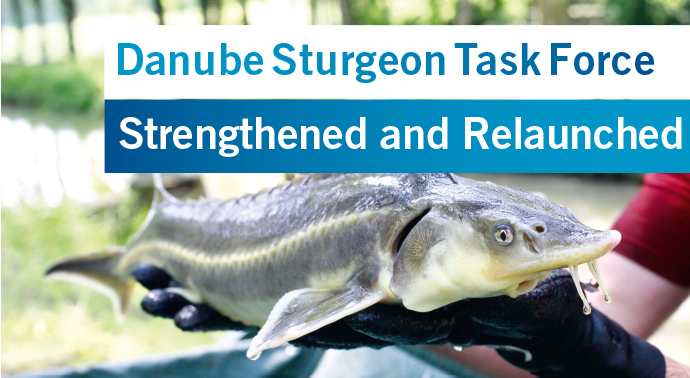 S ince its establishment in 2012, the Danube Sturgeon Task Force (DSTF) has been a frequent guest at ICPDR meetings, informing members about sturgeon conservation initiatives and threats. Although it has proven its value as a cooperative platform for sturgeon experts and actors from the scientific, governmental, and non-governmental realms, its members felt that agreeing on a set of principles and a clear governance mechanism would increase its effectiveness. Therefore, the DSTF was re-organised and streamlined under a new set of Rules of Procedure. They clarify the objectives of the work of the DSTF, the way DSTF members cooperate and communicate, and establish a permanent Executive Committee elected every three years.

The main objective of the DSTF is to raise awareness of the threats facing sturgeon species among decision-makers and the public. In addition, DSTF aims to build stakeholder capacity on sturgeon conservation by organising symposia, workshops, and conferences related to Danube sturgeon protection and the sustainable management of aquatic resources in the Danube and Black Sea Regions. It also seeks to provide expertise on, and advocate for, sturgeon conservation. The Sturgeon2020 Programme remains the guiding star of DSTF’s work. Since Sturgeon2020 was also endorsed by the 2016 ICPDR Ministerial Declaration, the cooperation between the ICPDR and the DSTF continues to be of mutual benefit. 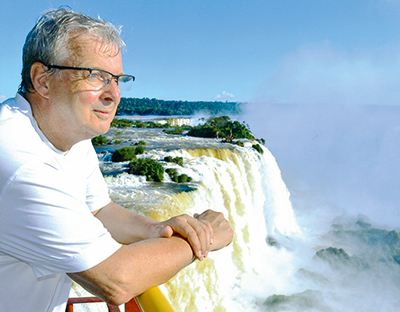 What will the DSTF's main areas of work be in the near future?
Peter Gammeltoft sheds some light on the matter, stating that “DSTF will focus on sturgeon habitat conservation, securing a diverse sturgeon gene pool through ex-situ conservation measures such as well-controlled hatcheries, promoting the continuation of fishing bans in Danube countries, and advocating for effective enforcement of laws protecting sturgeon.” The DSTF has already set up working groups and focal points to coordinate these different efforts.

To mark the beginning of the relaunched DSTF, a General Assembly made up of its members met in April 2019 in Vienna at BOKU University, itself a well-known player in the sturgeon expert world. The ICPDR joined the meeting under observer status. Florian Ballnus, one of the two Coordinators of Priority Area (PA) 6 Biodiversity of the EU Strategy for the Danube Region (EUSDR), opened the session by acknowledging that the DSTF was established under PA6 as a coordination and support mechanism, and still features as one of several Task Forces under the EUSDR.

The General Assembly elected a DSTF Executive Committee of six members with a balanced mix of expertise and background. Well known former Head of Unit for Water at DG Environment and ICPDR President in 2017, Peter Gammeltoft became the new DSTF Chair. “The Executive Committee is responsible for managing DSTF processes, taking operational decisions, and managing relations with external organisations,” explained Mr. Gammeltoft. He is supported in his function as spokesperson for the network by Gheorghe Constantin, who has been the Romanian Water Director for many years. The other members of the Executive Committee include the researchers Thomas Friedrich from Austria and Mirjana Lenhardt from Serbia, WWF representative Natalia Gozak from Ukraine, and Florian Ballnus as EUSDR PA6 Coordinator and representative of the Bavarian State Ministry for Environment and Consumer Protection.

DSTF and ICPDR have proven to be excellent partners and complement the work of each other well. Since the ICPDR´s mandate is limited to water management objectives, other types of sturgeon conservation measures, such as strengthening enforcement efforts against poaching, can be addressed by the DSTF. Moreover, the DSTF can provide a degree of scientific expertise which the ICPDR cannot. It can connect with nature conservation stakeholders outside of the scope of the ICPDR's focus. From the other side of things, the DSTF can greatly benefit from the ICPDR's network of water managers. This beneficial cooperation is why the DSTF has applied for ICPDR observer status. 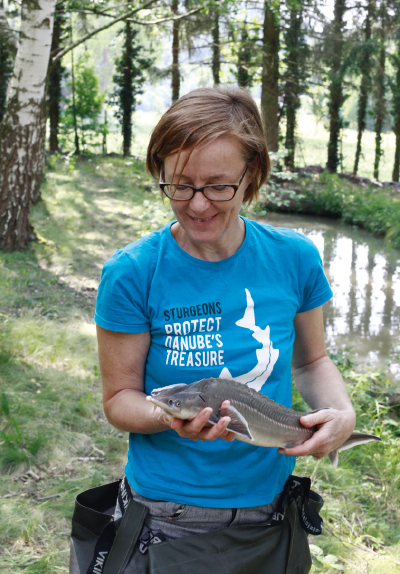 Sturgeon conservation, and thus DSTF´s work, just received a fresh boost on 22 May, the international Day of Biodiversity. Under the EU Habitats Directive, the European Commission and experts from EU Member States endorsed the implementation of a continent-wide action plan to save all eight European sturgeon species from extinction. The plan aims to conserve the last surviving sturgeon populations in Europe by tackling poaching and the illegal trade in wild sturgeon products, restoring habitats, and reintroducing sturgeon to many rivers. Indeed, it is high time for Europe to act. Today, natural reproduction is confined to only two European rivers – the Rioni in Georgia and the Danube! Although small native populations are found in the Gironde River system in France and the Po in Italy, they are most likely not reproducing.

The same conservation action plan was adopted last November in Strasbourg by the Standing Committee of the Bern Convention on the Conservation of European Wildlife and Natural Habitats – a legally binding treaty covering most of Europe’s natural heritage. The EU is party to the Bern Convention. The renewed endorsement of the same plan under the EU Habitats Directive is an encouraging sign that the seriousness of the situation has been acknowledged and member states will step up implementation efforts. DSTF is committed to contributing to the implementation of this Action Plan in the Danube River Basin. 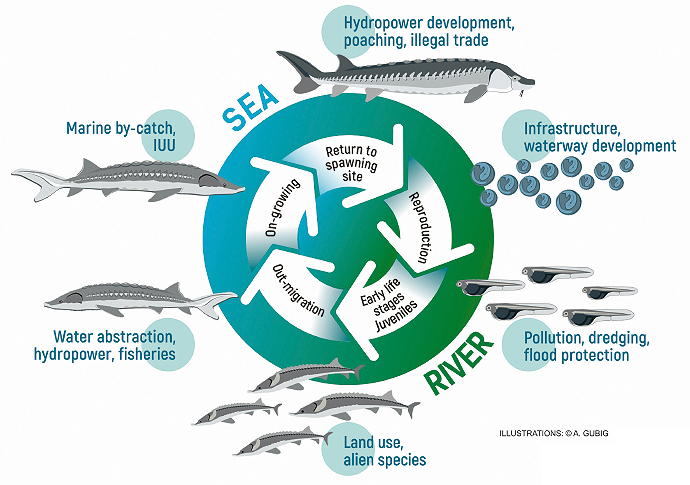 Are you involved in sturgeon conservation and want to become a DSTF member? Then apply by stating the reason you would like to join and sending it to info@dst.eu.

More information
can be found on the DSTF website.
www.dstf.eu

Next: Danube Watch 1/2019 - An Interview with Dr. Mirjana Lenhardt