Sturgeons are a unique species of fish whose origins can be traced back over 200 million years. Having undergone considerably little morphological change during this vast expanse of time, they are a remarkable evolutionary success story: dinosaurs became extinct yet sturgeons continued to thrive. Despite their longevity, today sturgeons are considered to be one of the most endangered species in the world.

On the brink of extinction
According to the International Union for Conservation of Nature (IUCN) over 85% of sturgeon species are classified as being at risk of extinction, thereby making them more critically endangered than any other group of species. Threats to their survival are numerous, the most serious being over-exploitation and poaching (exacerbated by poor fishery management and insufficient legal enforcement of fishing bans) and blocked migration routes through dams. The loss or degradation of habitats, and pollution are also major problems that are cause for serious concern.

With their long reproductive cycles and extensive migratory patterns, sturgeons are extremely sensitive to environmental pressures, making them valuable indicators for healthy rivers. The ICPDR has long realised the importance of this unique fish and endorses sturgeons native to the Danube as a flagship species. This commitment was emphasized on the occasion of the Danube Ministerial Conference in February 2016 where the ICPDR adopted sturgeons as a flagship species and reiterated at the annual Ordinary Meeting in Vienna in December 2017 with the announcement of the adoption of the Sturgeon Strategy.

The objective of this initiative is to channel synergies into one coherent strategy that will strengthen efforts to ensure the survival and recovery of sturgeons in the Danube River Basin. The principal aims of the strategy are:

The strategy is part of an ongoing initiative to promote action to be taken both within and outside of the mandate of the ICPDR. Cooperation with experts and stakeholders throughout Europe is considered a priority for the success of the strategy. The Danube Sturgeon Task Force (DSTF) was developed by the ICPDR jointly with the EU Strategy for the Danube Region (EUSDR) in 2012 with exactly these objectives in mind, and has since been striving to achieve the objectives of the current strategy by promoting the implementation of the ‘Sturgeon 2020’ programme.

Based on the Sturgeon Action Plan adopted under the Bern Convention in 2005, the objectives of ‘Sturgeon 2020’ are not only to improve the plight of the beleaguered sturgeon, but also to contribute to and improve social stability of the Middle and Lower stretches of the Danube. This involves improving the economic situation of communities which had previously benefitted financially from sturgeon fishing activities.

Key measures
Key measures for ‘Sturgeon 2020’ include the setting up of a pilot ex-situ facility for migratory species and in-situ monitoring of habitats and population behaviour along the Danube and its major tributaries. In addition, cooperation with contracting fish farms will facilitate the creation of an inventory of captive sturgeons. The establishment of national sturgeon conservation networks to foster the implementation of ‘Sturgeon 2020’ at national levels is also envisaged.

Specific measures
Measures to be undertaken by Danube countries by the year 2021 are intended to ensure both up and downstream migration of fish and other fauna. This includes ensuring the integrity and viability of migration routes, the existence of appropriate spawning grounds as well as appropriate ecology and water quality along migration routes and at spawning and nursery grounds.

The Danube River Basin Management Plans (DRBMP) developed under the EU Water Framework Directive (WFD) require the ongoing improvement of environmental conditions for all flora and fauna in the Danube region. The sturgeon has naturally benefitted from the EU legal framework and ICPDR policies but is currently facing two additional problems that threaten its very survival, both of which require specific measures to be taken:

1. Restoring migration routes
One of the largest engineering projects ever undertaken in Europe, the Iron Gate I and II hydroelectric dams clearly define the border between Romania and Serbia. Whilst ensuring safe and efficient navigation and an ample supply of reliable and sustainable energy for the region, this massive man-made structure today represents the biggest single obstacle to migrating fish in the Danube. Sturgeons are currently confined to the Lower Danube, the 850 km long stretch of the river between the Black Sea and the Iron Gates. The dams effectively block all access for migrating fish to the middle reaches of the Danube and the tributaries of the Drava, Sava and Tisza rivers, all of which are vital spawning and nursery grounds for migratory fish. 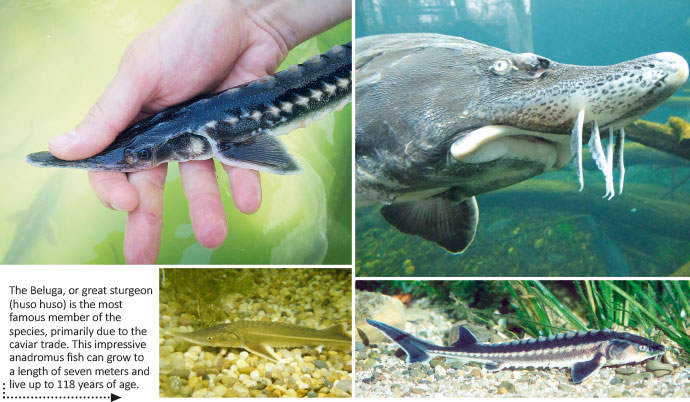 In order to address this issue, the ICPDR has facilitated the development of terms of reference for a feasibility study to analyze the options for enabling fish migration through the dams. Making the dams passable would recreate access to 800 km of the sturgeon’s traditional habitat and spawning grounds in the Middle Danube, thus greatly increasing their current freshwater range and significantly enhancing the chances of population recovery. If the measures resulting from this feasibility study are successful, similar measures will also be applied to the Gabčíkovo Dam, downstream from Bratislava, thereby allowing access to migrating fish to the Upper Danube.

2. Fighting over-exploitation
Although most sturgeon caviar today comes from aquaculture facilities, caviar from systematic poaching is still managing to find its way onto the market. A 2013 WWF study determined that illegal fishing activities and the caviar trade was a severe threat to the future of Danube sturgeons. Jutta Jahrl, a conservation expert with the World Wildlife Fund for Nature (WWF) stated at the time that “Romania and Bulgaria are home to the only viable wild sturgeon populations left in the European Union, but unless the sophisticated illegal fishing is stopped, these fish are doomed!”

In order for the strategy to be successful, measures need to be taken that are clearly outside of the mandate and expertise of the ICPDR. The ICPDR will therefore continue to support the already established network of DSTF partners to focus on the sustainable protection of lower Danube sturgeons. These partners will continue their work to ensure that fishing communities are encouraged to develop alternative income sources in order to reduce their dependency on this formerly prestigious, but now illegal activity. Law enforcement agencies will also be supported in their efforts to build the capacity required to pursue their fight against poaching, smuggling and illegal trade.

The final strand of the strategy is to promote public awareness of the plight of the sturgeon, using clear, simple everyday language. The annual Danube Day is a good example of how such a strategy can be implemented and will continue to play an important communication role with the slogan “Save our Danube Sturgeon”.

A first follow-up step to promote the strategy and stimulate activities is the organization of a European Sturgeon Conference under the upcoming Austrian EU Presidency, which will take place in July 2018 in Vienna. The event will provide an opportunity to review the state-of-play and discuss all concrete actions necessary.

Similar efforts currently being undertaken throughout Europe are beginning to show the first signs of success, indicating that there is yet hope for the sturgeon. The ICPDR’s Sturgeon Strategy can therefore only be good news for the long-term future of the Danube’s most iconic species.

Robert Ives is a freelance journalist and translator who also works as a lecturer at the University of Vienna. He is co-editor of Danube Watch.