Bucharest played host to the first International ICPDR Workshop on Wastewater Management in the Danube River Basin on 28-29 November 2017. The workshop was co-organised by the ICPDR, the International Association of Water Supply Companies in the Danube River Catchment Area (IAWD), the World Bank, and the Joint Research Center of the European Commission. The event was hosted by the National Administration “Romanian Waters” and the Romanian Ministry of Waters and Forests.

The workshop focused on the update of the ICPDR’s “Strategy on Adaptation to Climate Change” and its conclusions, which were finalised by the Ludwig Maximilian University (LMU) in February 2018. Lively discussions over the two days of the workshop drew the following conclusions:

The workshop focused on the update and the broader implementation of the original strategy, while seeking to include and incorporate voices from all over the Danube River Basin by addressing experiences with weather extremes and impacts on different water-related sectors. The discussions that took place during the workshop were extremely fruitful and produced a number of recommendations and suggestions for the update of the Adaptation Strategy. The main take home message was the realization that groundwater is a precious resource in adapting to droughts, and that the supply of water and its quality are vital aspects of the Climate Change Adaptation Strategy for the Danube River Basin. 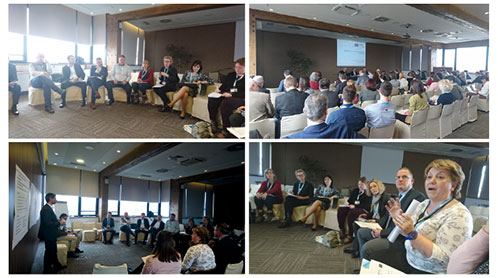 Next: Danube Watch 1/2018 - Sustaining the Danube Across Climate Frontiers