Since the 16th century, people have been changing the natural course of the rivers in the Danube River Basin, mainly for flood defence, hydropower generation and navigation. All these changes affect the ecological quality of the rivers. Changes in the depth or width of a river typically reduce flow rates, interrupting natural sediment transportation as well as the migration routes of animals.

Large dams and weirs, for instance, might not only interrupt the river and habitat continuity, but have an important effect on the natural sediment transportation, resulting in

Hydrological engineering works include dams, dykes, reservoirs, navigation channels and irrigation networks. Dams and reservoirs have been built in nearly all mountainous areas of the Danube Basin and in some lowland regions; navigation channels, dykes and irrigation networks are widespread in the lowlands along the middle and lower reaches of the Danube.

The current status of the hydromorphological alterations (e.g. river and habitat interruptions, disconnection of wetlands/floodplains and hydrological alterations) as well as future infrastructure projects are investigated and addressed in the frame of the Danube River Basin Management Plan (DRBM Plan).

The most serious problems resulting from the construction of hydropower facilities are the disruption of the longitudinal continuity of the rivers, and dramatic changes in the rivers' hydrological characteristics.

Aware of the fact that hydropower plants offer an additional reduction potential for greenhouse gases but recognising as well their negative impacts on the riverine ecology, the Ministers of the Danube countries asked in 2010 for the development of Guiding Principles on integrating environmental aspects in the use of hydropower in order to ensure a balanced and integrated development, dealing with the potential conflict of interest from the beginning.

Within the framework of a broad participative process launched in 2011, “Guiding Principles on Sustainable Hydropower Development in the Danube Basin” were elaborated. Besides outlining background information on the relevant legal framework and statistical data, the Guiding Principles are addressing the following key elements for the sustainability of hydropower:

The Guiding Principles were adopted by the ICPDR in June 2013 and are available in Bosnian, Croatian, Czech, German, Slovak, Slovene and Ukraine language.

In order to support the process of practical application of the “Guiding Principles” regular Hydropower Workshops are being organised by the ICPDR to exchange on experiences in place in Danube countries  e.g. with regard to technical upgrading of existing plants linked with ecological restoration measures, strategic planning approaches for new hydropower development and setting up of national stakeholder processes, or with regard to the application of mitigation measures.

Most large rivers in densely populated areas have been modified to help prevent floods, and to obtain new land for urban development. In many cases, hydrological engineering structures change river courses and channels considerably, with meanders and branches straightened and redirected.

The Danube itself is regulated along over 80% of its length. By cutting off the river from its floodplains, the frequency and duration of floods is changed, and former floodplains are degraded in ecological terms.

Vast areas of floodplain have been affected by river regulation or flood defence measures - in Hungary for instance an area of no less than 3.7 million hectares has been dyked.

In the Danube Delta, embankments were built in an area of more than 100,000 hectares, mostly areas liable to temporary flooding, although natural conditions have been restored over about in 15% of this area by ecological restoration schemes carried out since 1994.

Large dykes and cross-cutting meanders and river branches also influence groundwater levels by suppressing the exchange of water between the rivers and the groundwater reserves. This affects the renewal of riverbank filtrate used to purify the drinking water supply in certain areas.

The structural flood protection measures still keep their important role in protecting human health, the environment, cultural heritage and economic activity from floods but in line with the European Green Deal the potential of natural water retention measures has to be fully exploited to ensure the natural balance between flood protection and protecting nature and reversing the degradation of ecosystems.

The upper part of the Danube has been ideal for building hydropower plants due to the river's considerable natural gradient. Very few stretches can still be characterised as free-flowing.

The largest hydropower dams and reservoirs system (Iron Gate Dam I and II) along the entire Danube is partially located in the Djerdap Gorge  which stretches over a length of 144 km and is both the most beautiful and longest in Europe. This peak operation system consists of two dams, jointly operated by Romania and Serbia. The average flow rate of the Danube here is 5,500 m³/sec, and the river drops a total of over 34 metres. The capacity of the hydropower facilities is 2,532 MW, and annual production amounts to 13,140 GWh.

The Iron Gate system has transboundary effects. The reservoirs have a total volume of 3.2 billion m³, and a total length of 270 km. According to results from the EU Project Danube Sediment (completed 2019), the sedimentation rate of the Iron Gate I reservoir (filling of the reservoir), based also on bathymetric surveys (sedimentation volume compared to the original reservoir volume), amounts to 10-17%. Furthermore, the Iron Gates reservoirs serve both as an important nutrient sink and a sizeable deposit of hazardous and toxic pollutants originating upstream of the dam. The corresponding absence of natural sediments downstream has created erosion problems since the dam was put into operation in 1970.

The Iron Gate Dams I and II, both located where the Danube forms the boundary between Romania and Serbia, impound the Danube as far upstream as Novi Sad. Major impacts include the interruption of river and habitat continuity, thus hindering fish migration. Furthermore, considerable reductions in flow velocity and sediment transportation, and raised groundwater tables in the Serbian lowlands.

The second largest dam system is operated at Gabcikovo, downstream of Bratislava, since 1992. The dam is located near an area that used to form one of the region's largest wetlands. Today, 8,000 ha of floodplain forests and an extensive network of tributary channels are artificially irrigated. The original river channel nowadays: only receives 10-20% of the total flow, as the other 80-90% is channelled around the dam towards the power plant, where it is used to generate some 10% of the electricity used in Slovakia. The dam also has the function of protecting the downstream area from floods, and of regulating the water level for navigation purposes.

A 40-kilometre stretch of the original channel is badly affected by lack of sufficient water discharge. In some areas surface water and groundwater levels have dropped by up to 4 metres, greatly affecting the ecological conditions in the area's wetlands.

Restoration of river and habitat continuity

The status of migratory fish, such as the Danube sturgeon, is a parameter of the ecological condition and key indicator of the entire Danube River Basin. The Danube River is not only a key migration route itself, it is also of special importance for those species migrating from the Black Sea and connects all tributaries in the basin for migration. Currently (as of 2020), the Interreg project MEASURES (Managing and restoring aquatic EcologicAl corridors for migratory fiSh species in the danUbe RivEr baSin) , implemented from June 2018 to May 2021, explores the options of protecting and restoring this ecological corridor not only for sturgeons, but also for other Danubian migratory fish.

In general, all fish species of the Danube River Basin are migratory; however, the importance of migration for the viability of fish populations varies considerably among them. Differences exist in terms of migration distances, direction (upstream, downstream, and lateral), spawning habitats, seasons and the life stage for which migration takes place. For the sturgeons, what matters in terms of migration corridors and habitats is thus the integrity of the network at the scale of the basin and its interconnection with the conditions for sturgeons in the Black Sea.

The Iron Gate Dams I & II, the Gabcíkovo Dam and in part the chains of hydropower plants in Austria and Germany represent significant migration barriers for fish. Migratory fish, such as sturgeons as flagship species but also shads and medium distance migrants such as nase or barbel are particularly affected, since they are prevented from moving up or downstream between their spawning grounds and areas used at other times in their life cycle. 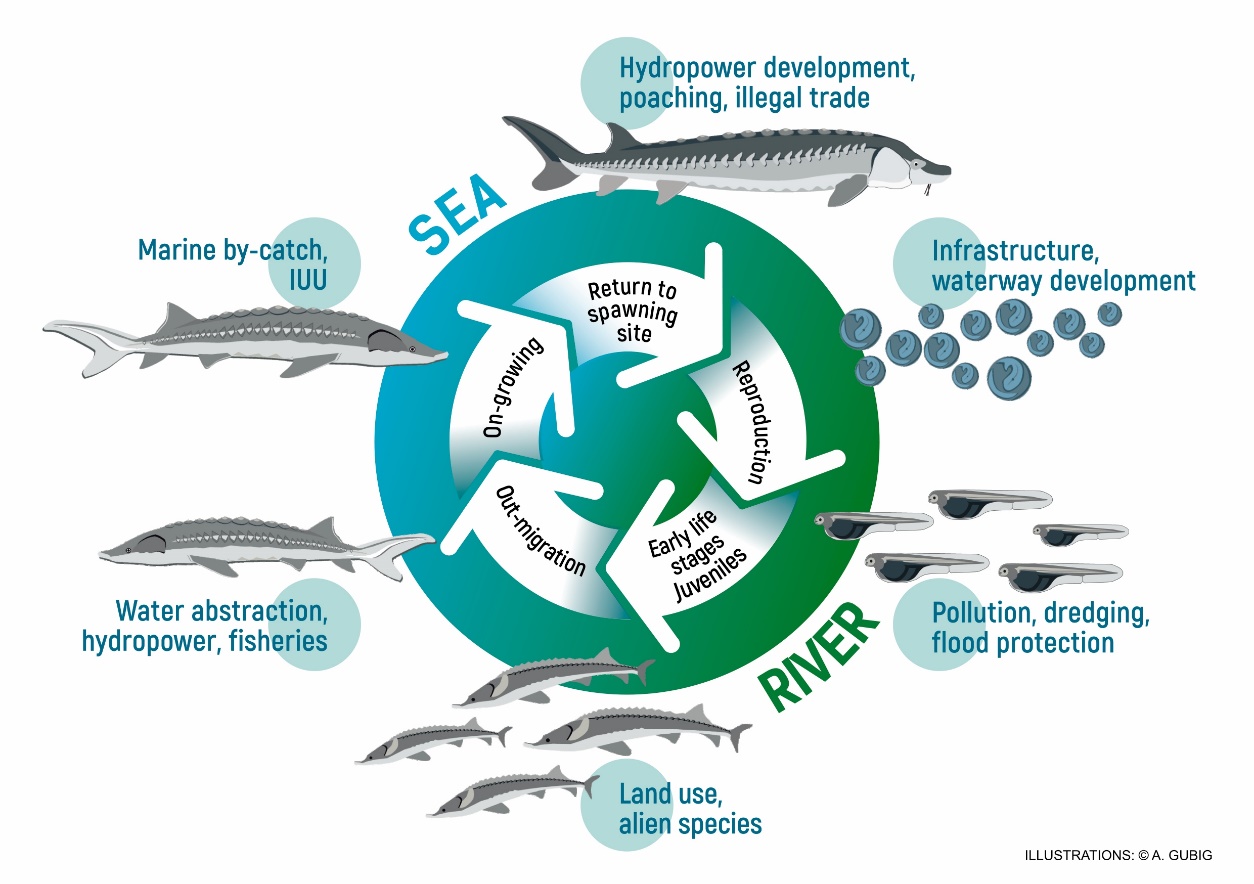 As a response, the ICPDR has started an initiative to restore river and habitat continuity. This approach is explained in further detail in the Danube River Basin Management Plan.