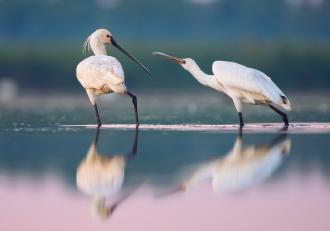 The largest part of the Tisza Basin is located in the Ukrainian Carpathian Mountains, which are middle-height mountains of 1,000 to 1,200 metres above sea level - the highest peaks reach 2,000 metres. The main mountain ranges are located longitudinally from north-west to south-east and divided by transverse river valleys.

One third of the Tisza Basin is located in the Zakarpattya Lowland, which forms part of the Great Hungarian Plain and the Pannonian Plain, with dominating heights of 120-180 metres above sea-level. Like the Tisza Basin, the Prut and Siret Basins are located mainly in the Ukrainian Carpathians, but in the eastern hills.

The Danube itself comes through the lower part of Ukraine; its length in the mouth is 174km. The Danube is divided here into three branches, one of which - the 112km Kiliya branch - forms the border between Ukraine and Romania.

The climate of the Tisza, Prut and Siret Basins in the Ukrainian Carpathians is reasonably continental. The region enjoys mild winters with thaws, a long, though unstable spring, a mild summer and warm autumn. The annual precipitation is between 1,750mm in the mountains and 700mm in the lowlands. The Danube hydrological regime in the Kiliya Delta is characterised by spring and summer floods and autumn to winter low water. The average water discharge at the mouth of the Danube River is approximately 6,400m3/s. Average precipitation in the delta is between 350mm and 400mm, and the amount of evaporation is between 800-900mm.

The Tisza and Prut in Ukraine are mountain rivers, and floods are therefore common. Landslides are typical phenomena for mountains, but are generally localised. The biggest floods on the Tisza occurred in November 1998 and March 2001, when the highest water levels and discharges were recorded. Both floods significantly damaged property and infrastructure and caused fatalities. Much has been done since then to improve flood prediction - automatic gauging stations were installed - and a significant amount of money was spent for the construction of flood defense works.

There are several hydropower stations in the Tisza Basin, with a total capacity of 31,600 kWt. Furthermore, there is a programme to develop a small hydropower sector on Tisza Basin Rivers, which is being implemented now.

While the rivers of the Tisza and Prut Basins cannot be used for navigation, Ukraine is united with Europe by the Danube River. The largest ports on the Danube in Ukraine are Izmail, Reni and Ust-Danube.
The potential shipping capacity on the Ukrainian part of the Danube is 26.95 million tonnes, however only a quarter of its capacity is used. Over the past years the local economy has suffered a sharp decline as cargo shipped through Ukrainian ports has dropped rapidly. Currently, Ukraine maintains the existing natural branches of the Danube River (the Bystroe and Kiliya), suitable for navigation.

Use of groundwater and surface water bodies: drinking water

The Tisza River Basin in Ukraine is rich in groundwater bodies, both alluvial and karstic waters. More than 60% of drinking water for the centralised water supply system comes from groundwater sources. Rural areas use groundwater from wells for drinking and household needs. In the Tisza Basin there are also several water catchments at tributaries for drinking needs, including Uzhgorod, Chop and Tyachiv. Approximately 40% of the total volume of drinking water comes from surface sources.

The Danube Biosphere Nature Reserve is home to more than 250 species of birds?