The Danube is a major economic, geographical and cultural force in Austria. Draining over 96% of the country’s territory, the basin is home to 7.7 million people. In a country dominated by the Alps, the flat lands provided by the rivers are vital for the agricultural sector, human settlements and infrastructure. The Austrian territory accounts for 10% of the total area of the Danube Basin. 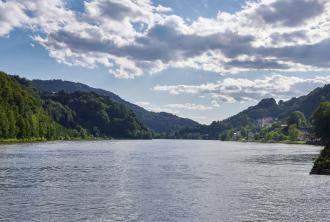 Austria is a mountainous state with the majority of its relief formed by the Alps: approx. 62% of the land area comprises mountainous terrain; the remainder is hilly, with low-lying plains to the East. Alpine geological formations run in a predominantly west-east direction, with water draining northwards to the Danube and south to the Drava/Drau and Mura/Mur. The gradient of the Austrian section of the Danube is approximately 0.4 ‰, being much steeper than in Lower Bavaria (c. 0.2 ‰) and along the Hungarian Plain (c. 0.06 ‰). The larger tributaries joining the Danube in Austria directly are Inn, Enns and  Morava/March.
The climate in Austria is continental, with minimum temperatures in January and maximal values in July.

Austria’s major rivers and valleys are heavily utilized. While more than 40% of Austria’s Danube Basin is used for agriculture, settlements and infrastructure; most of the remainder is too mountainous for such activities. With all available valley floor space developed, there has been a marked impact on rivers. Due to this development, and combined with steep river gradients, which result in low water storage capacity in the inundation zones, Austria has a long history of dealing with floods and landslides. Major river systems are also utilised for hydroelectric power generation (an important power source for the country); navigation (the Danube is a major international commercial waterway); as well as receiving waters for effluents and drinking water supply (nearly 100% of Austria’s domestic supply stems from alluvial and karstic ground water bodies).

Around 86% of Austrians live in houses with main sewerage. The remaining 14%, located largely in rural areas, are the focus for future wastewater management resources.

Treatment of point source nutrient discharges go beyond the requirements of the EU Urban Waste Water Directive and estimates for such discharges leaving Austria via rivers to the Black Sea are 15.2 kt/a for reactive nitrogen and 1.2 kt/a for phosphorus. The situation for diffuse discharges is less ideal, with past data for reactive nitrogen showing elevated concentrations in groundwater. Although it should be noted that these concentration have been declining. Concentrations are high where agricultural activities take place above groundwater bodies with a limited recharge rate. However, it is the low concentrations from Alpine areas that are more important in terms of their relative dispersion. Due to the large run-off from Austria, background fluxes are also elevated in relative terms when compared with other states. Estimates of the diffuse discharge of reactive nitrogen leaving Austria to the Black Sea is 64.3 kt/a. With regards to phosphorus levels, the share of reactive phosphorus from deposition is small. Estimates of the diffuse discharge of phosphorus leaving Austria to the Black Sea are around 4.7 kt/a.

Priority Substances, a large set of emission ordinances specifies the requirements for industrial wastewater discharges to waters and public sewerage systems. The effective implementation of emission-based requirements for industrial effluents is primarily characterised by internal (“front of pipe”) measures, such as prevention of raw material losses or water reuse added by reasonable “end of pipe” techniques of wastewater treatment.

For detailed information and statistics on the impact of pollution and hydro-morphological alterations to the Danube system, download the fact sheet below.

Austria has signed the Danube River Protection Convention already in 1994. Its capital Vienna is the location for the ICPDR Secretariat.