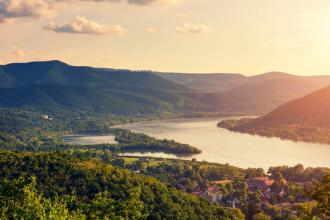 At the 24th Ordinary Meeting held last week, the ICPDR adopted the updated texts, annexes and maps for both the DRBMP & DFRMP Updates 2021. In a process that takes place every six years under the EU's Water Framework Directive (WFD) and Floods Directive (FD), these two plans will set the course of the ICPDR's water management priorities for the Danube River Basin until 2027.

The DRBMP Update 2021 sets out further aims to protect and enhance the status of all waters in the basin, and to prevent their deterioration while ensuring sustainable, long-term use of water resources. The plan also includes latest assessments on significant pressures, water status and a programme of measures jointly agreed by the Danube countries for the next six years. It establishes and strengthens several integrated principles for river basin management and connections to other sectors' policies like energy, transport and adaptation to climate change. This is the second update to the DRBMP, which was first adopted in 2009, and received its first update in 2015.

The DFRMP Update 2021 – the first update to the plan first published in 2015 – represents a key step forward in the ICPDR’s work towards sustainable flood risk management. It strengthens various aspects of flood risk management focusing on prevention, protection and preparedness, including measures for achieving the established objectives and calls for solidarity among all ICPDR Contracting Parties.

Throughout 2021, both management plans have been elaborated and reviewed with the involvement of stakeholders and the public alike, throughout the Danube River Basin during the ICPDR's Public Consultation Process.

For the next six years, the work of the ICPDR will be streamlined with the implementation of the plans and the measures contained therein.

EU Grant Agreement LIFE19 PRE AT 006 LIFE DRBMP DFRMP 2021
This activity was co-funded by the LIFE Programme of the European Union.