Targets for all Danube countries to meet:
implementing EU legislation

The best way to protect and manage water is by close international cooperation between all the countries within the river basin – bringing together all interests upstream and downstream. 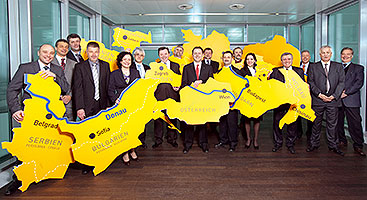 Ministerial Meeting in 2010: The responsible ministers of the main Danube River Basin countries reinforce the role of the ICPDR as coordination body for the implementation of the EU Water Framework Directive and the EU Floods Directive.
Credit: ICPDR/Stögmüller

Complex and holistic legislation introduced by the European Union ensures that all EU countries use a river basin approach for water management. The ICPDR serves as the coordination platform for this legislation in the Danube River Basin, in particular for the EU Water Framework Directive and the Floods Directive.

EU Water Framework Directive - Directive 2000/60/EC The EU Water Framework Directive (WFD), which came into force in 2000, establishes a legal framework to protect and enhance the status of aquatic ecosystems, prevent their deterioration, and ensure long-term, sustainable use of water resources. The Directive provides for an innovative approach for water management based on river basins, the natural geographical and hydrological units, and sets specific deadlines for EU Member States. The WFD addresses inland surface waters (rivers and lakes), transitional waters, coastal waters, groundwater and, under specific conditions, water dependent terrestrial ecosystems and wetlands.

While EU Member States are obliged to fulfil this Directive, at the time of its adoption most Contracting Parties to the Danube River Protection Convention were not EU Member States. However, all Danube countries pledged their firm political commitment to support the implementation of the WFD in their countries. Furthermore, the countries agreed that implementation of the EU WFD was the ICPDR’s highest priority and the ICPDR would provide a platform for the coordination of the Danube River Basin Management Plan required under the Directive.

EU Floods Directive - Directive 2007/60/EC The EU Floods Directive (EFD), which entered into force in 2007, aims to reduce and manage the risks that floods pose to human health, the environment, cultural heritage and economic activity. The Directive required Member States to carry out a preliminary assessment, which was completed for the Danube Basin in 2011. The Preliminary Flood Risk Assessment Report for the Danube Basin, based on input from Danube countries, identifies areas of potential significant flood risk. For such areas, countries then needed to draw up flood risk maps by 2013 and establish flood risk management plans focused on prevention, protection and preparedness by 2015.

The basic principles of environmentally sound flood risk management had already been incorporated into the ICPDR Action Programme for Sustainable Flood Protection, adopted in 2004, which aimed to achieve a long-term approach to managing
the risk of floods to protect human life and property, while at the same time encouraging conservation and the improvement of water-related ecosystems. Furthermore, flood action plans in the sub-basins were drawn up. With ICPDR acting as observer, the FLOODRISK project began in 2009 to develop uniform flood risk maps that would define flood hazards and vulnerability and form the methodological basis for targeting measures and reducing flood damage in the Danube Basin. Today, the ICPDR coordinates the implementation of the EFD in the Danube River Basin similar to the WFD. The first Danube River Basin Flood Risk Management Plan is under preparation and will be available at the end of 2015.

Next: Germany - A shared responsibility to protect resources