Dynamic LifeLines for the Danube Floodplains

The Austrian-Slovak LIFE project, "Dynamic LIFE Lines Danube" focuses on the reconnection of tributaries to the Danube that were previously cut off for river regulation. The aim is to enable these waters to once again fulfil their functions as dynamic lifelines of the floodplains. 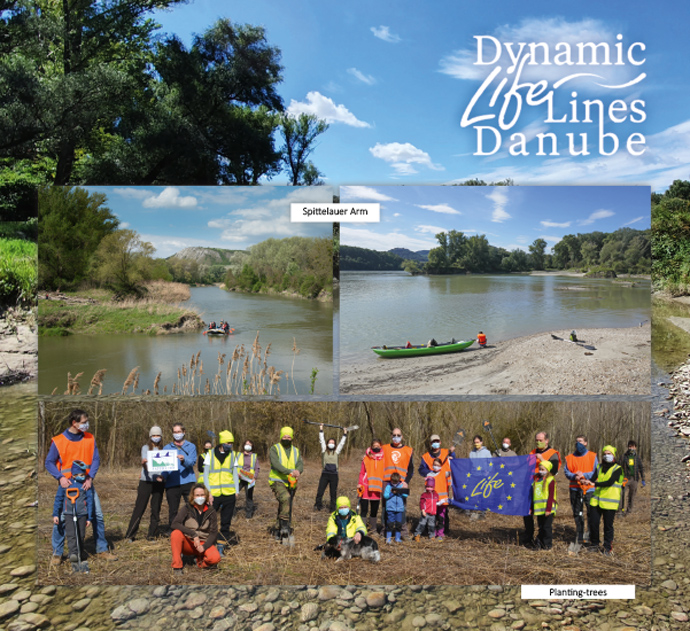 Of the once mighty floodplain landscapes along the Upper Danube, today only a few areas remain. In Austria and Slovakia, the floodplains have been largely regulated and separated from the river by stone-made bank protection and traverses. Drying trends and the loss of river dynamics are the consequence. But floodplains depend on dynamics - meaning that the flow of the river leads to erosion and sedime-ntation to shape the landscape and that water levels fluctuate naturally. Many endangered plant and animal species are dependent on these changing conditions. Typical trees such as willows and poplars cannot rejuvenate in an already established forest - they need open gravel areas, good connection to groundwater and changing water levels.

Since last year, the first achievements can be seen in the wild. The Spittelauer branch opposite the town of Hainburg is once again flowed through by the Danube. Most of the construction work was already carried out in 2020. More than 150,000 m³ of stone material and deposited fine sediments had to be moved in order to upgrade a total of 4.3 km of tributaries as habitat. In addition to the creation of an inflow and an outflow opening, all existing traverses were removed. About 700 m of bank restorations were implemented. After the construction work, the so-called “Thurnhaufen” has become a large island, now serving as a retreat for mammals and birds.

The success of the measures has been visible already since shortly after the reconnection. The tributary, which was subject to silting up before, is now developing as desired towards a dynamic lifeline for the Stopfenreuther Au. Steep banks, gentle gravel banks, scour- and ford areas have been forming. The water body offers fish a high-quality habitat protected from wave impact caused by inland navigation. The sea eagle, which breeds at the edge of the Spittelauer branch, also benefits from the reconnection. Protection provisions were developed for this large bird of prey for the construction period, which have proven very effective.

An interesting aspect of this renaturation site is that a large hydropower plant was in fact planned right on this very spot back in the 1980s. The construction project, which had already been approved, failed as a result of the emerging environmental awareness amongst civil society. The failure ultimately led to the establishment of the Danube Floodplain National Park in 1996.

All other river engineering works of "Dynamic LIFE Lines Danube" are currently at different stages of the preparation phase. They are to be implemented step by step in the coming years.

On the Slovakian side, the availability of land must be ensured prior to construction measures and the consortium has already been very successful in this respect. Substantial progress has also been made in supporting native tree species. Notably, more than 14,700 seedlings of typical tree species of the Danube floodplains have been planted in the Istragov area.

Last but not least, the LIFE project also includes measures to involve local communities at the project sites and networking events for interested organisations in the Danube basin to exchange and discuss experiences on renaturation. Look out for opportunities to interact with the “Dynamic LIFE Lines Danube” team.

The ambitious renaturation effort is being coordinated by the Austrian waterway company viadonau and is being implemented together with the Slovakian NGO BROZ, the Comenius University Bratislava (Faculty of Natural Sciences), the Slovak National Forest Centre (NLC), WWF Austria and the Donau-Auen National Park. This dynamic partnership has to implement the measures until 2026. In total, about €10.7 million are to be invested in the improvement of the Danube floodplain habitat. The project is co-financed by the European Union, with contributions by the Province of Lower Austria and the Lower Austrian Fisheries Association.

By Robert Tögel –
a trained business engineer working for viadonau since 2006, Robert is currently head of their “Integrated River Engineering” team.