The Living Danube Partnership – working to restore rivers and wetlands 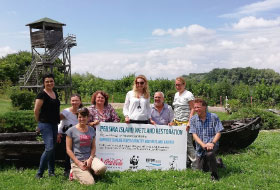 Vienna 26 June: the WWF, Coca-Cola Foundation, Coca-Cola Company and the ICPDR took stock of the progress of their seven-year partnership for rivers and wetlands in the Danube River Basin by releasing the mid-term report for the Living Danube Partnership. The partnership is on track to restore over 53 km² of wetland habitat by 2020, and has helped to raise nearly €20 million for wetland conservation and restoration.

River and wetland restoration projects to replenish and enhance water conditions for both flora and fauna have already been completed at various hotspots for biodiversity and include:

Despite initial delays, six further projects are currently in various stages of development and are on track to deliver an estimated 12.85 million m3 of replenished water and 6,829 hectares of restored wetlands by 2021.

In the coming years, the Living Danube Partnership will also support restoration projects in Barcs Old-Drava oxbow in Hungary, the Lankoc floodplain forest in Hungary, the Drava River side-arms in Croatia and at Garla Mare and Cetate in Romania. 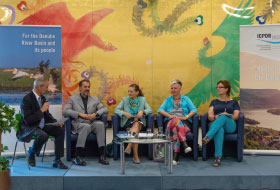 On 4-6 July 2018, the ICPDR held a special exhibition and press event in the Rotunda at the Vienna International Centre (VIC). Staff at the VIC, along with other interested parties and journalists, were invited to a series of events to mark the International Danube Day celebrations.

The event was staged in cooperation with the Austrian Federal Ministry for Sustainability and Tourism, and the United Nations Information Service (UNIS) to celebrate 24 years of international cooperation across the Danube River Basin. The exhibition showcased the highlights of 15 years of Danube Day through film and photographs and the vast collection of artwork created to mark the day over the years.

The proceedings opened on 4 July with a panel discussion moderated by UNIS Vienna Director, Martin Nesirky. The panel’s experts were ICPDR Executive Secretary Ivan Zavadsky, Lorena Feruta from the Permanent Mission of Romania to the International Organisations in Vienna and Susanne Brandstetter and Veronika Koller-Kreimel from the Austrian Federal Ministry for Sustainability and Tourism. This was followed by the screening of two short films: "Danube Day" and "Danube Art Master".

The second day of the exhibition featured a “meet the press” session with special guest Pascal Rösler, who travelled the 2,467 km of the Danube River from the Black Forest to the Black Sea on his stand-up paddle board (SUP) in the summer of 2017 to raise awareness of the great importance that water has on our lives. This was followed by the screening of the film 2467 – Eine Reise bis ins Schwarze Meer (2467 – A journey to the Black Sea) which documents his epic voyage.

A high-level conference took place in Vienna on 9-10 July, with 50 experts from national administrations, the EU, academia and NGOs coming together to discuss the transnational protection of the iconic sturgeon in the Danube River. The event was organised jointly by the ICPDR and the Austrian Federal Ministry for Sustainability and Tourism within the framework of the Austrian EU Presidency.

The overall objective of the conference was to trigger comprehensive action for sturgeon conservation and the restoration of their habitats and migration corridors, not only in the Danube pan European level. During the two days of the conference an effective strategy was hammered out that will help to enable:

The conference was hailed as a positive step towards bringing together relevant institutions and experts to share up-to-date information essential to sturgeon conservation activities. It also provided an overview of the challenges likely to be faced during the implementation of the recently adopted ICPDR Sturgeon Strategy. All of the conference participants stressed their commitment to promoting the need for action and raising public awareness of the sturgeon’s plight.