8th World Water Forum in Brazil: the ICPDR contributes to a number of stimulating forum discussions on the theme: “Sharing Water” 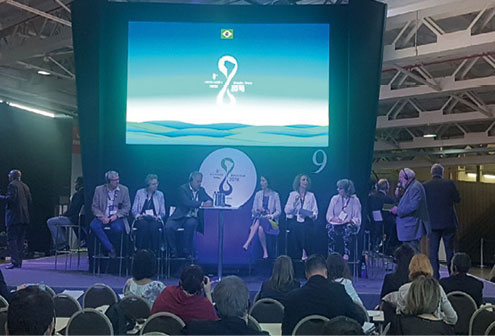 Tuesday 20 and 21 March saw the ICPDR take the opportunity to provide essential input during three different sessions at the 8th World Water Forum in Rio de Janeiro (Brazil). The theme of the forum "Sharing Water" stimulated in-depth discussions concerning sustainability processes and the United Nations Sustainable Development Goals (SDGs), along with additional water-related targets and the Paris Climate Agreement. The ICPDR was able to contribute to the debate by providing real-world examples of regional processes in the Danube River Basin and the Black Sea.

ICPDR 2018 President Helge Wendenburg chaired a session titled “European Ecosystems: Bridging Systems and Services,” in which he highlighted the ICPDR’s experiences accross a broad spectrum of issues, including managing and restoring ecosystems for water services, biodiversity, water and land use, ensuring water quality from ridge to reef, along with natural and engineered hydrological systems in Europe.

A keynote address by 2017 ICPDR President Peter Gammeltoft was followed by commentaries from the ICPDR Heads of Delegation from Bulgaria (Ms Atanaska Nikolova) and Slovenia (Mr Mitja Bricelj). Ms Nikolova also spoke about the legal and institutional framework of the cooperation between the ICPDR and the Black Sea Commission. These talks helped to provided participants with a comprehensive overview of successful ICPDR case studies and contained key lessons, messages and recommendations for global dissemination.

Another session focused more closely on the economic development of hydrographic basins and the safety of hydrographic infrastructure. During this session, ICPDR President Wendenburg presented ICPDR activities, as well as its success in addressing flood risks, accident prevention control, and the Accident Emergency Warning System (AEWS).

The 8th World Water Forum provided the ICPDR representatives with a golden opportunity to present both perspectives and experiences of the Danube River Basin as an inspiration for other regions to successfully achieve their aims. 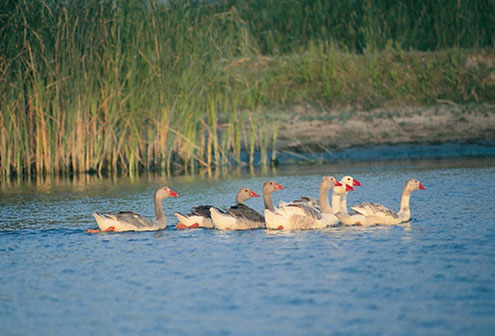 Wetlands are a great deal more than just a source of natural beauty and a recreational destination for local communities. They also serve a wide variety of other important roles and functions that may not be obvious at first glance. For this reason, WWD 2018 highlighted the need for the effective conservation of urban wetlands to facilitate sustainable urbanization.

Wetlands play a vital role for cities and the whole community. They serve as a source of drinking water, with their vegetation filtering domestic and industrial waste and improving water quality. However, their most important role in urban areas is to act as crucial retention areas during flood events, thereby demonstrating just how essential they are to the safety and protection of the basin and its inhabitants.

The ICPDR has made considerable efforts to facilitate and enhance the protection, restoration and creation of new wetlands in the Danube River Basin. Like all of the ICPDR’s core objectives, measures to be taken are based on the Danube River Protection Convention of 1994, which were reflected in the First Danube River Basin Management Plan (DRBMP) and further emphasized in its 2015 Update.


Germany takes over ICPDR Presidency for 2018 from the European Union 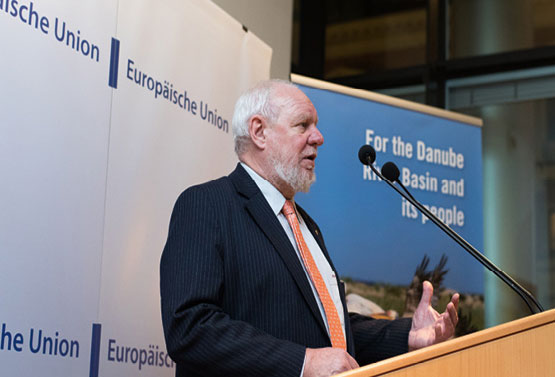 On 24 January 2018, an event at the House of the European Union celebrated Germany’s accession to the annual Presidency of the ICPDR. During his speech, the incoming ICPDR President Helge Wendenburg set three main priorities for his term of office.

Mr Wendenburg's first objective is to finalize the updated ICPDR Climate Change Adaptation Strategy by the end of 2018. This strategy lays the foundation for a common, Danube Basin-wide understanding of the future impacts of climate change on water resources and the adaptation of suitable measures.

The second priority of the German Presidency is the continued implementation of the existing plans and preparation for the next phase of the EU Water Framework Directive (WFD) and Flood Directive (FD).

The third priority of Mr Wendenburg’s tenure will be to strengthen the integrated approach of the ICPDR and the basin-wide exchange of knowledge and experiences. A series of workshops and bilateral capacity-building activities will take place to facilitate this, dealing with specific issues concerning the various challenges of implementing the WFD and the FD experienced by countries in the Danube Basin.

Mr Wendenburg concluded his inauguration speech by expressing his appreciation for the outgoing ICPDR Presidency and his predecessor Peter Gammeltoft for his excellent work as President in 2017.

Elisabeth Köstinger, the Austrian Federal Minister of Sustainability and Tourism (BMNT), also attended the handover ceremony and emphasized Austria’s commitment to the ICPDR, stressing that international cooperation is essential because water related challenges do not stop at borders.