On Thursday, 8 February 2018 in Munich (Germany), The Pure Water for Generations-film project of Pascal Rösler, a SUP-Paddler ICPDR friend and water advocate, was met with a resounding positive response from the audience at the premiere. Among the attendees were, Ulrike Scharf, Minister of the Environment and ICPDR Executive Secretary Ivan Zavadksy. 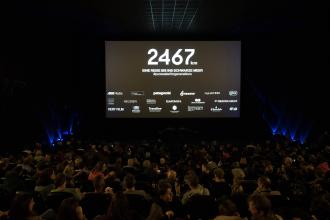 Last Thursday, the 8th of February, saw a packed “blue carpet” at the Mathäser cinema in Munich. Almost 400 guests went to see the film premiere of 2467km – A journey to the Black Sea.  The movie tells the story of 44 year-old stand-up-paddler and environmental activist, Pascal Rösler, who paddled the entire Danube from Munich to the Black Sea. With this extraordinary project and his organization, “Pure Water for Generations e.V”, Pascal Rösler seeks to raise global awareness around water and river pollution issues. He hopes to collect funds for further nature-conversation projects.

The film traces Mr. Rösler’s journey through Europe and his interactions with athletes and environment advocates he met along the way. The one-hour documentary also includes impressive cinematography of natural landscapes and thought-provoking conversations. Among the more prominent guests of the premiere was Ulrike Scharf, Bavarian State Minister for Environment and Consumer Protection.  ICPDR Executive Secretary Ivan Zavadsky was also in attendance.

Pascal Rösler shares the same vision as the ICPDR does in seeking to make the waters of the Danube River Basin cleaner, healthier and safer for future generations. This shared goal was discussed at length during his stop-over at the ICPDR Secretariat in Vienna. ICPDR activities such as, promoting and coordinating sustainable and equitable water management, including conservation, as well as the improvement and rational use of waters for the benefit of the Danube River Basin countries left him reinvigorated for his journey further downstream.

The next viewing is scheduled for 20 February 2018 at 8 pm in Central Kino and Kultur in Teuchtlingen, Germany. Due to the success of the film, more viewings are planned to take place in Munich. To find out more about the project and future film screenings please see the Pure Water for Generations page: www.pure-water-for-generations.com
Watch the film trailer on the following page:https://vimeo.com/250779480