On 2-3 June 2017 the sixth Youth Parliament of the Sava River Basin competition was held in Belgrade (Serbia). The motto for this year’s competition was “The Impact of Climate Change on the Lives of the Sava River Basin”. 60 students and teachers from nine secondary schools from the Croatia, Serbia, Slovenia and Bosnia-Herzegovina attended. The Sava Commission is an observer of the ICPDR. 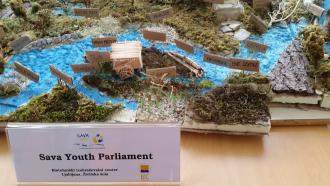 The Sava Youth Parliament is a platform that presents a golden opportunity for young people to present their environmental works, which were submitted for the competition. The topics this year were reduction and adaption to climate change, showcasing how young people can change the decision-making system of climate change and the way they disseminate the important issues discussed in this year’s event. The event was moderated was done by WWF, the ISRBC and Young Researchers from Serbia.

One winner from Slovenia who came with his teacher, reflected on his experience with his classmates at the Bled Water Festival. From a boat trip to a river island on the Danube River in Belgrade -  the Veliko Ratno Ostrvo – to a nice welcome ceremony and an introduction of all schools from the participating countries, ending with a talk about invasive alien plant species, he told a story of cooperation for a good cause where the youth finds its rightful place.  The day after the prizes were awarded to the winners, a new committee was selected by the Youth Parliament, which appointed a new Presidency. It consists of the president of the host country and a representative of each of the participating countries. The common river, the Sava, was at the core of discussions and highlighted the importance of water as a connector in the Sava River Basin.

For the young participants, the Sava Youth Parliament was an amazing experience, bringing all participating nations together around a common goal:  preserving and protecting the Sava River Basin. It is only when working together that we can solve many of the world´s problems.