Vienna, 11 December 2006. “Two young Romanians have won the ‘International Danube Art Master 2006’ competition, for their creation titled ‘The Danube Flows Through Us’’, announced Philip Weller, Executive Secretary of the ICPDR today. Mr. Weller made the announcement at the Annual Meeting of the Delegations to the ICPDR being held at the Vienna International Centre.

The winning submission was created by Udrea Oana Simona and George Boghici from Galati, Romania. Both are 17 years of age. The painting illustrates the link between people and the Danube, using natural material from the Danube, and paint. 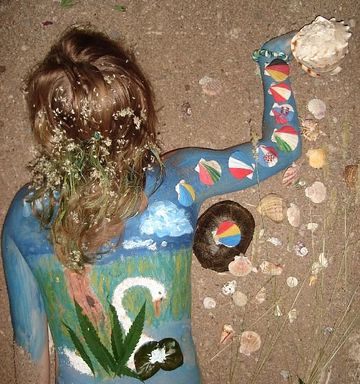 The Danube Flows Through Us

The International Master is selected from the winners of the national 'Danube Art Master' competitions which is held in 13 Danube Basin countries including Austria, Bosnia and Herzegovina, Bulgaria, Croatia, Czech Republic, Germany, Hungary, Moldova, Romania, Serbia, Slovakia, Slovenia and Ukraine. Some 3,500 applications from schools in these countries were submitted.

The "International Danube Art Master 2006" competition was announced on Danube Day on 29 June 2006. The competition was linked to the event's central theme - "The Danube is more than just water" - to illustrate the complexity of the Danube River Basin and how rivers connect with land, animals, forests and people.

Children were encouraged to visit local rivers and surrounding environments to think about their importance and connections. They were then asked to reflect their thoughts and inspirations through environmental art, using materials from in and around the river.

Other examples of prize-winning submissions at the national level included Hungary's Balance made from fencing, stones, wood and plants, and Germany's Water Carpet made of numerous paintings.

The competition was jointly organized by the ICPDR and the Danube Environmental Forum (DEF), the largest network of environmental NGOs in the Danube Basin.

"We believe that this competition encourages children to learn more about the Danube and help protect it," said ICPDR Executive Secretary Philip Weller. "It is also an artistic reminder for adults and the representatives of Danube national Governments of their joint responsibility to ensure that the Danube is protected for future generations."

The award ceremony is the highlight of a three-day trip for all national winners to Vienna. The Trip is supported by Coca-Cola HBC, The Coca-Cola Company and Global Water Partnership Hungary.