Riparian bird species as indicators for river dynamics and morphology

River dynamics and natural morphological processes are the key for long-term preservation of the Danube River ecosystem and determine the great habitat variety and species richness. Within the ICPDR Joint Danube Survey, DANUBEPARKS began to monitor of two indicator species to describe the situation of river morphology on a Danube-wide scale. 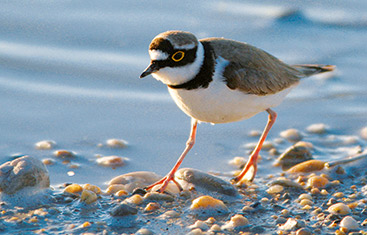 More than 81% of all territories for the Little Ringed Plover were found on banks and islands.
© ICPDR/Mello

The Little Ringed Plover and Sand Martin are both closely linked with river dynamic habitats. Once abundant along the Danube, these bird species have begun to disappear from their natural environment because of human impact: regulations of meanders and side arms, embankments and dams have changed the healthy status of river habitats.

Spectacular Sand Martin colonies, endangered by river regulation. The Sand Martin burrows its nests into steep natural river banks; breeding colonies indicate sites where natural lateral erosion is still active. In 2013, 103 colonies with a total of 10,453 breeding pairs of Sand Martin could be located along the Danube. (2011: 82 colonies with 22,817 pairs.) Sites such as Deliblato Sands Special Nature Reserve in Serbia with the largest colonies of up to 16,000 bird individuals offer impressive nature experiences, however all colonies along the Danube should be focal points of conservation and priority subjects of protection.

River dynamics contribute to good ecological status. Statistical models showed the significant correlation between intact hydromorphology and the presence of indicator species: in slightly modified river sections (hydromorphology class 2), the probability of the occurrence of one of the two species is about 89% per 10 river kilometres; in class I (near-natural reference condition; extinct along the Danube) the indicator bird species could even be expected with a probability of about 97%. Stronger hydromorphological alterations greatly decrease the occurrence of species to 30% in sections with class 4 (extensively modified). Consequently, rivers can realise their biological potential only when natural or no more than slightly modified.

River dynamics goes public. The scientific monitoring was shared with the public through school events, river wilderness excursions and topic presentations: the Little Ringed Plover and Sand Martin fascinated many people and continued to raise awareness for natural river morphology along the Danube.

Next: The Danube inspires a river survey in southern Africa