Putting new methods to use for the Danube 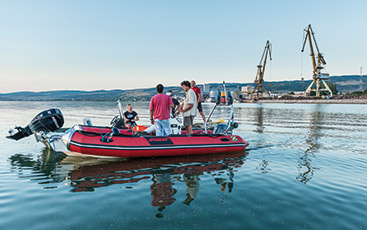 A specific focus in the Joint Danube Survey 3 (JDS3) was the identification and prioritisation of Danube River Basin Specific Pollutants (RB SPs) in support of the revision of the Danube River Basin District Management Plan in 2015. The EU Water Framework Directive requires environmental quality standards for each RB SP relevant at the basin level. The substance must also be regularly monitored and a plan targeting it included in the
programme of measures.

Several unique approaches were applied for the first time as part of the JDS3, including techniques of solid phase extraction to sample large volumes (500–1000 litres) of water, passive sampling to allow for the detection of highly diluted pollutants as well as the screening of non-target contaminants within the entire river basin. These techniques are contributing to the recent developments in the network of reference laboratories, research centres and related organisations for monitoring of emerging environmental substances (NORMAN network), where the JDS3 dataset is used as a model example for detecting very wide range of substances at a large river basin scale and archiving the raw full-scan mass chromatograms for retrospective screening of emerging pollutants.

Large volume sampling. Several techniques were used to tackle the “pollution dilution” problem of spot sampling in large rivers. Toxicological effect-based screening requires the extraction of large volumes of water to provide samples for a variety of bioassays and multi-target chemical analyses. At the same time, transporting and preparing extracts of hundreds of litres of water is a big challenge. A newly developed mobile large volume solid phase extraction device (LVSPE) was used to extract water samples of up to 1000 litres during the survey.

This technique was successfully applied at 22 sites to realise effect-based screening on a river basin scale. The chemical screening resulted in the detection of 91 compounds (out of 264 targeted compounds) in at least one sample. Relatively high concentrations were found of pharmaceuticals, artificial sweeteners, corrosion inhibitors and industrial chemicals, and concentrations of widely used herbicides were also frequently detected. The samples were analysed with a battery of 11 bioassays to assess the toxic effects of compounds (and their mixtures) present in the samples.

Passive sampling. In addition, the survey ship was equipped with an ‘active’ passive sampler system to screen for trace organic pollutants and their toxic potentials. Three types of passive samplers were installed to capture a wide range of compounds with different physico-chemical properties. During the sampling, the laboratory survey ship moved downstream along a defined stretch and collected samples containing pollutants integrated in time and space along that stretch. Samplers were exchanged every four to six days to cover the pre-defined river stretches.

Despite the low concentrations of most organic pollutants present in the samples, passive sampling enables the clear identification of spatial gradients of a broad range of organic pollutants in the water column, including polychlorinated biphenyls, organochlorine compounds, polyaromatic hydrocarbons, alkylphenols, selected polar pesticides and pharmaceuticals. Passive sampling made it possible to detect some compounds at low concentration levels that were not attainable with other methods in the JDS3. In most cases, passive samplers confirmed a similar distribution of pollutants along the river as observed in the JDS2. 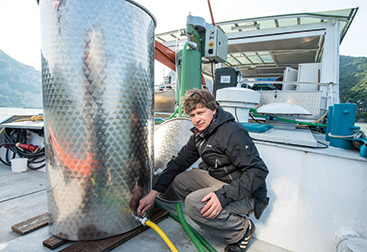 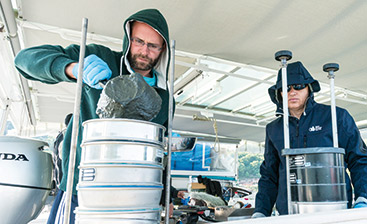 Many samples were tested on board the ships, while others were shipped to participating laboratories throughout Europe. Leading laboratories across Europe carried out chemical analyses, and corporate partners, such as the Coca-Cola System and Donauchemie, supported the JDS3 through financial contributions and by sharing their knowledge about water management from the private sector perspective.
© A. Künzelmann, UFZ

Non-target screening. Chemical pollution has largely unknown effects on aquatic life and human health. To ensure that all contaminants are detected requires a non-targeted approach. During the JDS3, state-of-the-art liquid and gas chromatography-
mass spectrometry (LC-MS, GC-MS) techniques in three different laboratories were used for non-target screening of all JDS3 samples – with the goal to search for as many compounds as possible while focusing on compounds not previously known to be present in the Danube River and its tributaries.

Initial results from non-target screening revealed the presence of more than 3370 different organic compounds in the Danube water samples. The follow-up evaluations resulted in the identification of 56 additional substances, mostly pesticides, pharmaceuticals and personal care products. The remaining suspect or unknown compounds still need to be investigated. The statistical analysis of data has clearly pointed out significantly differing pollution patterns of thousands of detected compounds for the river stretches and countries within the basin.

Prioritisation. Out of a list of hundreds of target pollutants, 20 substances were preliminarily considered of basin-wide relevance, which all exceeded the ecotoxicological threshold value at one or more sampling sites. In fact, 16 of the 20 substances were found at more than 20 of the 68 sites sampled. Of these 20 substances, five are priority substances as defined by the EU Water Framework Directive (three polyaromatic hydrocarbons, fluoranthene and PFOS (polyfluorinated substance)) and two candidate compounds on the EU Watch List (17beta-estradiol and diclofenac). The top ten substances were dominated by: the pesticides 2,4-dinitrophenol (exceeding the limit at all sites), chloroxuron, bromacil, dimefuron and diazinon; transformation products of widely used atrazine and terbuthylazine; PFOS; and the plasticiser bisphenol A and polyaromatic hydrocarbon benzo(g,h,i)perylene.

For more information about the results of the JDS3, visit danubesurvey.org for the JDS3 Final Scientific Report.

Jaroslav Slobodnik is an expert at the Environmental Institute, Kos, Slovak Republic.

Next: Riparian bird species as indicators for river dynamics and morphology