In its continuing series, Danube Watch presents portraits of the leaders whose passion and commitment help determine the future of our river basin. In this issue, we speak to the ICPDR President for 2013, Deputy Minister Ermina Salkičević-Dizdarević. 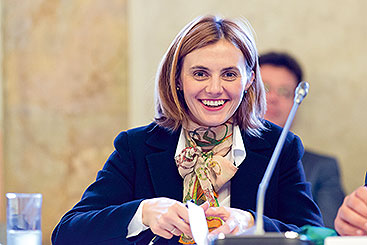 “I will focus on harmonising the diversity that characterises the region shared by 19 states and over 81 million people, people from different language families, landscapes and culture. This diversity is not the region’s weakness but, on the contrary, its advantage.”

High-level representatives from the Danube Basin countries, observer organisations and the corporate world of the Business Friends of the Danube joined outgoing president Wolfgang Stalzer as he presented a bottle of Danube water to Ermina Salkičević-Dizdarević on 15 January 2013. Through this ceremony, the ICPDR Presidency for 2013 has been passed to Bosnia and Herzegovina.

Danube Watch: What activities will mark your presidency?
Ermina Salkičević-Dizdarević: The current crisis seen in the fields of finance, energy and the environment reinforce the idea that sustainable and effective solutions can be found at the regional level. I will focus on harmonising the diversity that characterises the region shared by 19 states and over 81 million people, people from different language families, landscapes and culture. This diversity is not the region’s weakness but,
on the contrary, its advantage.

During the presidency of Bosnia and Herzegovina, one of our priorities will be the successful finalisation of the Joint Danube Survey 3, the main objective of which will be to produce highly comparable and reliable information on water quality and pollution.
I will also emphasise activities such as: finalising guiding principles for the development of hydropower in the Danube Basin which balance environmental and economic needs; continuing to work towards balancing the needs of the environment and the economy in the management of inland navigation; implementing measures laid down in the climate change adaptation strategy for the Danube Basin and continuing to cooperate with other international water organisations.

I plan to continue developing the policy lines that have already been initiated and to follow the positive experiences made during Austria’s presidency. The great advantage of the ICPDR is the fact that the Secretariat is a permanent body which guarantees continuity and ongoing support.

Danube Watch: Coming from both a Danube and Sava country, how do you see the coordination between the Sava Commission and the ICPDR?
Ermi na Salkičević-Dizdarević: The Sava River is the biggest
tributary of the Danube River by water content. The condition of this water has a perceptible influence on settlements, transport, agriculture, energy and industrial development. From its beginning in 2002, the International Sava River Basin Commission – with our fellow Member States Croatia, Montenegro, Serbia and Slovenia – has promoted cooperation with the Secretariat of the ICPDR, the Danube Commission and the United Nations Economic Commission for Europe. The Commission has tackled issues which are of crucial importance for transboundary development in the Sava River Basin; examples of this are the 2008 feasibility study for reconstruction and development of inland navigation in the Sava River Basin, the 2009 protocol on water pollution caused by navigation, the 2010 protocol on flood protection and the Sava River Basin Management Plan in 2012.

The experiences and results of the Sava initiative represent a good model for the Danube. By working on these complex issues, the Sava countries have learned how to develop the measures for the EU Strategy for the Danube Region. I believe that the International Sava River Basin Commission is approaching the next step that will provide the additional push to the Danube Strategy.

Danube Watch: 2013 is the UN’s ‘International Year of Water Cooperation’ – what is the significance of the ICPDR in fostering international cooperation on water?
Ermina Salkičević-Dizdarević: The ICPDR is a positive, internationally recognised example of cooperation in a transboundary river system. The ICPDR acknowledges that countries cannot solve water issues alone; they need to cooperate with business. The Danube countries have been doing so through cooperation arrangements with the ICPDR’s Business Friends of the Danube.

The countries of the Danube have historically benefitted from support from international organisations and have a sense of obligation to share their experience with other river basins. A good example of this is the twinning arrangement with our colleagues from the Orange Senqu River Commission (ORASECOM) in Southern Africa where both commissions can learn and profit from each other.

Implementation of agreements such as the Danube Protection Convention, as well as the EU Water Framework Directive and the EU Flood Directive are the reason why the ICPDR is a bright example for all water organisations. We are all working to achieve international cooperation in the conservation of our planet’s natural heritage – which we have only borrowed from future generations.

Since 2012
Ministry for Foreign Trade and Economic Relations,
Deputy Minister

Since 2004
University of Sarajevo, Department of Marketing
Master thesis in progress

Benedikt Mandl is the Technical Expert for Public Participation and Communication in the ICPDR Secretariat, and the Executive Editor of Danube Watch.

Next: A hotspot no more: a wastewater treatment plant for Bucharest