Ministers and high-level representatives responsible for the water management in the Danube River Basin from Austria, Bosnia and Herzegovina, Bulgaria, Croatia, the Czech Republic, Germany, Hungary, Montenegro, the Republic of Moldova, Romania, Serbia, Slovakia, Slovenia, Ukraine and the European Commission attended a Ministerial Meeting of States Parties to the Danube River Protection Convention, hosted by the ICPDR on 16 February in Vienna, Austria.

The Ministers evaluated the progress towards the protection and sustainable use of water and other ecological resources and reaffirm and strengthened their commitment to transboundary cooperation in the Danube River Basin.

The Ministerial Meeting adopted the Danube River Basin Management Plan, which outlines concrete measures to be implemented by the year 2015 to improve the environmental condition of the Danube and its tributaries. The measures include the reduction of organic and nutrient pollution, offsetting environmentally detrimental effects of man-made structural changes to the river, improvements to urban wastewater systems, the introduction of Phosphate-free detergents in all markets and effective risk management of accidental pollution. Further, measures to restore river continuity for fish migration as well as the reconnection of wetlands will be tackled. The plan takes a source-to-sea approach and addresses key requirements of the European Union Water Framework Directive.

Flood action plans for the 17 sub-basins in the Danube catchment area has been adopted. These sub-basin plans contain hundreds of concrete measures the Danube countries will take to protect their populations from floods and to mitigate the flood damage and losses, such as those caused by the massive floods in the years 2002, 2005 and 2006.

As the highlight of the meeting, the ministers of all Danube countries endorseed the `Danube Declaration´, which expresses the commitment to further reinforce transboundary cooperation on sustainable water resource management within the Danube River Basin. 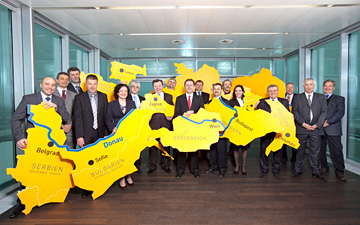 This photo of the Ministers and representatives holding a giant Danube Basin puzzle can be downloaded below in full resolution.

More photos can be downloaded free of charge, clicking this link!

View or download a short film about the Ministerial Meeting.