One of the most important environmental projects in Romania is providing wastewater treatment for the tenth largest city in Europe, thus solving one of the major pollution sources in the Danube River Basin. 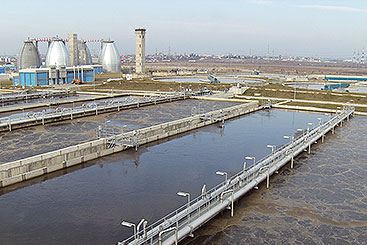 The Aeration tanks, combined heating power unit, primary settlement tanks and digesters of the Bucharest Wastewater Treatment Plant, the capacity of which was enlarged to about 2.2 million population equivalent.

In November 2012, the European Commission released its Water Blueprint, a new strategy designed to improve responses to water quality challenges. The Blueprint aims to make water use sustainable in the EU and to ensure that there is enough good quality water available for human needs, economic activities and the environment. The Blueprint is related to the EU’s 2020 Strategy, and is the water milestone for the 2011 Resource Efficiency Roadmap.

The Blueprint aims to address lagging achievement towards the WFD target for reaching ‘good’ ecological status in European waters by 2015. To achieve this, the Blueprint proposes a three-tier approach: to improve implementation of EU water policy, especially the EU Water Framework Directive (WFD); to integrate water policy into agriculture, fisheries and other policy areas; and to fill the gaps in the current water policy framework.

The strategy doesn’t propose a ‘one size fits all’ approach, but instead proposes a tool box which Member States can use to improve water quality at local, regional and national levels. The Blueprint proposals are the result of a process that involved extensive public and stakeholder consultations, and will continue to rely on an open participation process involving Member States, NGOs and businesses – as covered by the Common Implementation Strategy of the WFD. The Blueprint is expected to cover activities up to 2050 and to drive EU water policy in the long term.

The River runs through the city of Bucharest, after which it crosses the Romanian Plain to join the Arges River and then the Danube. Until 2011, Bucharest – with nearly two million inhabitants in the urban area – discharged its wastewaters directly into the river. These wastewaters had seriously deteriorated the Dâmbovit¸a and Arges¸ Rivers and made Bucharest the largest polluter of the Danube in the region. Now, thanks to one of the most ambitious environmental projects in Romania, one of the major pollution hotspots in the Danube River Basin can be eliminated.

Putting the plant to use. The first stage of the project began in 2007 and was completed in 2011. This included rehabilitating mechanical treatment and extending biological treatment to include nitrogen removal. A biological and chemical phosphorus treatment installation was built, and construction was completed on sludge anaerobic digesters as well as the necessary capacity for thickening and dewatering the sludge, including biogas reservoirs. In addition, the project included the construction of a drainage system and storm water storage capacities. The budget for the project, € 108.3 million, was financed through grants from the Instrument for Structural Policies for Pre-Accession (ISPA) programme, loans from the European Bank for Reconstruction and Development and the European Investment Bank as well as state budget funds.

Today Line I of the wastewater treatment plant is operated by SC Apa Nova Bucureşti SA. It ensures that 55% of the area’s wastewater is treated in compliance with the standards of the EU Urban Wastewater Treatment Directive for discharge to sensitive water bodies. Rehabilitating and extending the wastewater treatment plant has reduced the amount of the pollutants – mainly organic, suspended solids and nutrients (total nitrogen and total phosphorus). The project significantly reduces the impact of Bucharest’s urban wastewater on surface water resources. 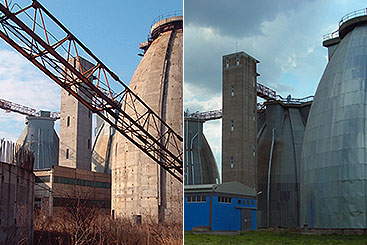 The digesters’ access tower in 2007, and in 2011 after the reconstruction.

A major model for progress. The benefits of the new wastewater treatment plant can be seen beyond the improved water quality. The project has contributed to increasing the public’s awareness of the pollution effects of wastewater and the responsibility to protect river ecosystems.

In addition, the project serves as a model for implementation of measures in the Danube River Basin. The wastewater treatment plant was highlighted as a ‘Lighthouse Project’ in the ICPDR’s Interim Report on the Implementation of the Joint Programme of Measures to provide examples of projects of basin-wide relevance. Furthermore, the wastewater treatment plant project is an excellent example of the type of projects proposed by the European Commission’s Water Blueprint strategy, the EU’s response to the continuing challenge of meeting the EU water policy goals.

Cutting pollution for good. The second stage of the project is planned for 2013 to 2017 and will build Line II of the wastewater treatment plant to increase the treatment capacity. The project aims to increase the capacity of fermentation for sludge treatment, adding thickening and drying equipment. In addition, an incinerator will be built to ensure the entire process of sludge management. The investment value of the project is estimated at approximately €350 million, to be financed through Cohesion Funds.

After completing both stages, the plant will ensure the treatment of the entire wastewater flow of the Bucharest urban area and will discharge an effluent which will meet the requirements of national and European legislation, thus eliminating one of the major pollution hotspots in the Danube River basin.

Next: 2013: International Year of Water Cooperation