Efforts to curb overfishing are under way across the Danube River Basin to restore dwindling sturgeon populations – which will ensure sustainable sturgeon fishing for future generations. 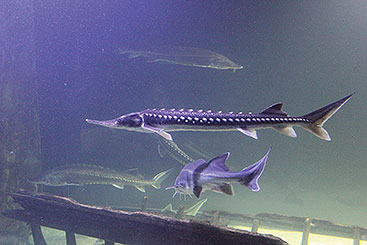 Illegal fishing – mainly for their caviar – is one of the main threats sturgeons face in the Danube River Basin.

Throughout history, human civilisations in the Danube River basin have been tied to the existence of sturgeons. Archaeological discoveries show that Roman settlements all along the Danube were mainly located in areas where people could easily fish for sturgeons, and fishing has remained an important livelihood in the region.

However, decreasing stocks in previous decades signal the continuing decline of Danube sturgeons, which face threats from
habitat destruction, blocked migration routes and especially overfishing. Today, communities, enforcement agencies and governments are working together to stop overfishing and preserve the last viable populations of wild sturgeons in Europe.

An important break for sturgeons. The most important break for sturgeons came in 2006 when Romania announced a ten-year ban on commercial fishing of wild sturgeons, as well as in the trading of products obtained from sturgeons captured in Romania. Following this, the Convention of International Trade in Endangered Species of Wild Fauna (CITES) banned sturgeon caviar exports from wild sturgeons in the Lower Danube in 2007. Serbia introduced legislation in 2009 which closed seasons for some sturgeon species, increased a minimum size for sturgeon and banned unbaited hook lines. Then in 2011, Bulgaria added its own one-year ban on sturgeon fishing, and Ukraine set export quotas to zero for all wild sturgeons and products derived from them.

“The fishing bans are quite an amazing achievement,” says Radu Suciu, head of the Sturgeon Research Group at the Danube Delta National Institute. “It has made a difference and drawn needed attention to the issue.”

The high cost of living. Sturgeons are particularly vulnerable to overfishing, as they reach maturity relatively late (up to 20 years) and they have long life cycles so it takes stocks many years to recover. Driving this overfishing is the extremely high prices paid for sturgeon caviar. Among the sturgeon species native to the Danube is the Beluga sturgeon, famous for its expensive caviar. Retail prices for caviar can reach 6,000 Euros and up per kilo.

Sturgeon meat is also in demand as a delicacy and it commands higher prices than any other local fish sources. Add to this the low income of locals and few alternative sources of revenue, and the difficulties in curbing overfishing are clear.

A black market in caviar. “There is a big and brazen black market for caviar in Romania and abroad,” says an unnamed source who worked as an Undercover Surveyor for a market survey on illegal caviar trade to be published later this year by WWF Austria and TRAFFIC.

“In a restaurant in Tulcea, Romania, the head waitress had an ‘in-your-face’ attitude, not only ignoring the law, but literally expressing her contempt for it. In posh restaurants in Bucharest, the law is at least carefully considered and not despised. However both cases express a general permissive attitude of authorities and a rather ‘easy’ market for caviar,” says the Undercover Surveyor.

Advanced enforcement. Illegal caviar trade is not only an issue of the protection of endangered species, but it is a matter of contraband and likely organised crime. Furthermore it results in lost tax revenues for the countries involved. Effective enforcement is a vital prerequisite for a successful fight against poaching and illegal wildlife. This should include strong interagency and transborder coordination and employment of modern technology such as DNA analysis.

In most cases, it is not possible to determine the species origin of caviar by visual inspection. However, DNA analysis of caviar or other sturgeon products has proved capable of identification at the species level. On a large scale, DNA testing of caviar in trade could provide indications of which sturgeon species are most traded and which are most affected by poaching. While DNA analysis cannot identify different populations of the same species (such as Black Sea vs Caspian Sea sturgeons), nor distinguish between wild and farmed fish, looking at fatty acid compositions (reflecting differences in feed sources between wild or farmed sturgeons) or analysis of isotopes could be effective in further identifying sources.

Bottom drift nets for larvae set downstream of spawning site for Beluga sturgeons and sterlets at Danube River Km 310 (May 2009).

Getting into the field. Alternative sources of income for fishermen might lie with species other than sturgeons, the refinement of fishery products, aquaculture or even eco-tourism. “However, there are no general off-the-shelf solutions,” says Ralf Reinartz, consultant for fisheries and aquatic ecology in Germany Reinartz. “Finding the correct answers for specific questions here will have to also involve research in the field of socio-economics.”

The WWF project Saving Danube Sturgeons, funded by the EU Life+ programme, in Austria, Bulgaria and Romania has placed small teams of sturgeon advocates in Bulgaria and Romania to create a communication network and catalyse debates on sturgeon conservation issues. “Tourism or even sustainable caviar production could provide alternative sources of income, but who knows what is best for those communities than the communities themselves?” says Alexandra Panait, Sturgeon Advocate in Romania. “The region is formed from a fascinating cultural tapestry, which, I believe, has a multitude of inner creativity resources that could stimulate the social and conservation sustainable grass roots reforms. Therefore, one of the roles of our presence is to facilitate in part this valuable process, providing access to information and creating a dialogue space,” says Panait.

Solutions for boosting sturgeon stocks. Sturgeon farming is a fast growing sector in the region. When operating in compliance with nature conservation, this Preparaindustry can be positive for local livelihoods and for wild sturgeons. However, sturgeon farming requires high investments and has a long payback time until caviar can be harvested and profits made. As of now, six companies in Bulgaria and three in Romania are officially registered as licensed exporters, processing or repackaging plants.

Furthermore, sturgeon breeders have been critical in restocking efforts. Bulgaria has restocked over 15,000 sturgeons since 2006, and Ukraine released 50,000 sturgeons in 2009. The largest supportive stocking programme began in Romania in 2006, which stocked over 430,000 during its four-year run. Most of these were individually tagged with coded-wire tags which provide information about the fish. An evaluation programme of the restocking is expected to begin this year to gather information about the distribution of the tagged fish and collect data about their growth and adaptation in the wild.

Coming to a common understanding. The most important progress may be that the work achieved at the national level has been matched with grassroots efforts to fight poaching on the local level. “Quite a few fishermen question the fate of future generations if the sturgeons will be extinct. This could represent the common ground for both people and biodiversity, relating people’s long term socio-economic vision with the scientific reality of sturgeons’ long life span,” says Panait. “In short, learning from sturgeon’s biology, people can learn something about how they can make sustainability happen.”

Next: Cut off from the river – reconnecting sturgeon migration routes