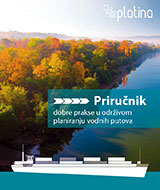 A Croatian version of the Platina Manual has been published, aiming to provide practical guidance to sustainable waterway development for inland navigation.
The translation was managed by the Croatian waterway agency ‘Agencija za vodne putove’. The manual is based on the Platina Manual of the same name, first published in English in 2010 and developed through an EU-funded project for which the ICPDR and via donau acted as project partners. The main aim of the manual is the creation of win-win situations by ensuring that environmental considerations are built into inland waterway projects. The Croatian version is a big step in promoting the use of the guidelines in the Western Balkans and will hopefully help spread its contents. It can be downloaded from the ICPDR website.

Download the Croatian version of the Platina Manual here: www.icpdr.org/main/sustainable-waterway-planning-platina-manual-croatian

Environmental pollution by pharmaceuticals is increasingly recognised as a major threat to aquatic ecosystems. Varieties of pharmaceuticals enter waterways by way of treated wastewater effluents and remain biochemically active in aquatic systems. Several ecotoxicological studies have been carried out, but generally little was known about the ecological effects of pharmaceuticals. Swedish scientists have now demonstrated that an anxiolytic drug (oxazepam) alters the behaviour of wild European perch (Perca fluviatilis) at concentrations encountered in effluentinfluenced surface waters. Individuals exposed to water with dilute drug concentrations exhibited increased activity, reduced sociality and a higher feeding rate, as reported in the magazine Science. The ICPDR’s ‘Joint Danube Survey 3’ will sample a range of micropollutants along the Danube in its six-week sampling period later this year.

The 2012 ‘Interim Report on the Implementation of the Joint Program of Measures in the Danube River Basin District’ was published by the ICPDR. The objective of the report is to provide an overview of the state of play – as of the end of 2012 – regarding the implementation of the Joint Programme of Measures as included in the First Danube River Basin Management Plan and agreed upon by the Danube countries.

The schedule can be downloaded at:
www.icpdr.org/main/public-participation-schedule-wfd-efd

The first ever European Water Stewardship (EWS) Standard Certification was awarded to two bottling plants of The Coca-Cola Company, a ‘Business Friend of the Danube’. The EWS, an initiative of the NGO European Water Partnership, focuses on practical guidance for industry and agriculture towards more sustainable water management. The EWS system helps industry and agriculture respond to the objectives of the EU Water Framework Directive to assess, improve, maintain and communicate sustainable water and ecosystem management. The ICPDR congratulates its ‘Business Friend of the Danube’ for this achievement.

Learn more about the European Water Partnership at: www.ewp.eu

Next: A home for living fossils – protecting the sturgeons habitats