As most sturgeons are confined to the Lower Danube by dams and other structures, their populations are mere remnants of what they once were. One of the most urgent tasks now is to link the historic spawning grounds in the Middle Danube to the surviving sturgeons in the Lower Danube and the Black Sea. 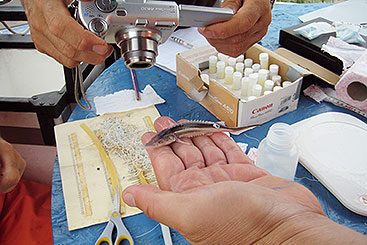 Until well into the 20th century, sturgeons migrated from the Black Sea up the Danube as far as Germany to reach their spawning grounds and were important mainstays for many fishing communities. Today, because of dams and other obstacles, sturgeons are restricted to just over half that length in the Lower Danube.

Spawning migration is an integral part of the natural life cycle of all Danube sturgeons. This makes them especially sensitive to the impacts of physical barriers such as dams. With their numbers dwindling under the threats of overfishing and habitat loss, to protect this valuable species we need to identify and understand the main migration routes and patterns and restore migration by establishingplaces where the sturgeons can pass and prevent further fragmentation of the current distribution areas.

Getting around the Iron Gates. The Iron Gates dams located just below the Iron Gates gorge between Romania and Serbia are the largest obstacles on the Danube for sturgeons. Constructed in the 1970s and 1980s, they make up the largest hydropower dam and reservoir system along the entire Danube. The dams restrict migratory sturgeons to 863 kilometres of the river and cut off important spawning sites in the Middle Danube. By installing appropriate fish passes in the Iron Gates dams, an additional 800 kilometres of the Danube could be reopened to migratory sturgeons (for more information, see Danube Watch 3/12).

Building fish migration aids at this site is a challenge, however. There is a 35-metre difference in water level at Iron Gate I alone and there is little space around the structure of the dam – both problems that can not be solved easily with standard solutions for fish migration.

In May 2011 an ICPDR mission, together with FAO, took place at the Iron Gates and allowed experts to further investigate the possibilities for fish migration at these sites. The next step is a feasibility study for the restoration of river continuity, and the ICPDR is working on securing funding for the study. Preparaindustry tory work is now under way to have such a project developed in the European Union’s next financing period from 2014 to 2020.

Creating migration routes. If artificial migration routes can be constructed, they still have to be accepted by the sturgeons, since wild populations are genetically bound to the habitats where they were born. There are examples from other river systems that sturgeons may accept artificial solutions at migration barriers. “However, even the best passing solution will always be selective and therefore inferior to the free flowing river when it comes to supporting sturgeon migration,” says Ralf Reinartz, consultant for fisheries and aquatic ecology in Germany.

Though more than 100 fish migration aids are planned to be built by 2015, the problem cannot be solved at once. To ensure the most effective implementation of these measures, the ICPDR has developed an ecological prioritisation approach for continuity restoration in the Danube River Basin. This approach provides information about where measures would be most efficient ecologically and where they will offer the biggest benefit for fish, letting river managers know where to start first. The results of the prioritisation assessment show that continuity interruptions among others in the Lower Danube at the Iron Gates dams should be given the highest priority.

Finding joint solutions. The EU Strategy for the Danube Region uses a ‘macroregional’ framework to produce more effective coordination to address issues. The Strategy focuses on eleven priority areas, and Priority Area 6 (Preserve biodiversity, landscapes and the quality of air and soils) specifically mentions the conservation of sturgeon.

Furthermore, the ICPDR is leading efforts to bring stakeholders together to protect the sturgeons. As the administrating platform for the Danube River Basin Management Plan – which includes issues on sturgeons – the ICPDR coordinates work on river and habitats continuity to meet the requirements of the EU Water Framework Directive.

Most importantly, however, reconnecting sturgeon habitats and ensuring river continuity will require all countries to work together, and the ICPDR provides the link between countries to focus work at the basinwide level.

WWF project for the protection of Danube sturgeons

For the WWF Danube-Carpathian Programme, the conservation of sturgeons in the Danube – where five of the six originally native species are critically endangered – is of special importance.

In Bulgaria, a three-year project funded by the EU’s Environment Operational Pro-WWF project for the protection of Danube sturgeons gramme aims to identify and protect key sturgeon spawning sites in the Bulgarian part of the Danube, as these crucial habitats are still largely unknown and under threat of destruction by water engineering or gravel extraction. The project will also facilitate the release of 50,000 young sturgeons, bred from genetically pure Danube stocks, to support wild populations. The project will compile scientific information and evaluate relevant legislation, and together with stakeholders design efficient protection measures for sturgeons in Bulgaria by 2015.

Another three-year project, focusing on Romania and Bulgaria and financed by the EU’s LIFE+ programme, aims to fight overexploitation of sturgeons. Unsustainable or illegal fishing and caviar trade are the main direct threats to the survival of Danube sturgeons, despite bans on sturgeon fishing in both countries. Therefore the project works with fishing communities – most affected by the fishing bans but yet rather neglected – and supports the efforts of enforcement authorities.

For more on the project, please visit:
www.danube-sturgeons.org.

Jutta Jahrl is the sturgeon expert at WWF and the project manager of the Life+ project Saving Danube
Sturgeons.