Following the publication of the ICPDR's Danube River Basin Management Plan (DRBMP) & Danube Flood Risk Management Plan (DFRMP) Update 2021, and their endorsement at the 4th Danube Ministerial Meeting, these important publications have been given a new and fresh look and summarised into two brochures. 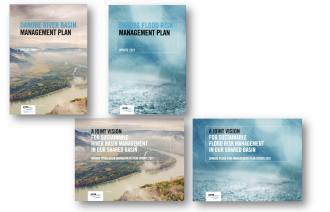 After the finalisation of the ICPDR's updated Management Plans at the end of 2021, the ICPDR is proud to present a newly redesigned set of these important documents.

These documents have been created with improved digital functions, such as clickable links and navigable tables of contents, while still maximising utility as a paper publication.

In addition to the full length texts of both the DRBMP & DFRMP Updates 2021, two derivative brochures that condense and summarise the material of these plans into 28-page and 24-page brochures respectively, have also been produced, offering the general public an easy way to understand the contents and implications and highlighting the main messages of the two plans.

These brochures comprise a digested and simplified version of the plans, highlighting the most important aims and visions for the future laid out in these important documents, paving the way forward for a cleaner, healthier, and safer Danube River Basin.

The documents can be freely downloaded in both high and low resolution below.