VIENNA, 29 October 2018 (Press Release) - The winner of the ‘International Danube Art Master 2018’ competition is 17-year-old Ion Zatic of Moldova, announced Susanne Brandstetter, Chairperson of the Public Participation Expert Group of the International Commission for the Protection of the Danube River (ICPDR). The Public Participation Expert Group is responsible for promoting the Danube Art Master initiative in the Danube River Basin. The second and third winners are Austria followed by Serbia. 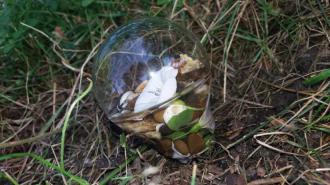 ”Everything that man touched, has been transformed into a closed ecosystem!” is  the name of the winning artwork. Its creator, Ion Zatic, is a student at the Corjova School, Moldova. Concerned about the damage to natural habitats caused by industrialization and urbanization, he appeals to put more efforts into to preserving the natural ecosystems instead of creating artificial ones.

Art work
The Danube Art Master winner is selected by 13 countries, which share the Danube River Basin, including Austria, Bosnia and Herzegovina, Bulgaria, Croatia, Germany, Hungary, Moldova, Romania, Serbia, Montenegro, Slovakia, Slovenia and Ukraine. The competition is open to all children and schools across the 14 countries that make up the Danube River Basin. Around 1109 children from 142 schools participated, submitting about 401 artworks and 60 videos including team submissions.

Second and third places went to 13-year-old Anais König of Austria for her project, “Inspired by the Danube”, and Sara Đuka, Tamara Petrović and Marija Rašković from Prva Beogradska Gimnazija, Belgrade, Serbia for their project titled “Play by the Danube”. Anais König is a student at the Lycée Français in Vienna. Her artwork shares her unique perspective as a photographer. “Play by the Danube” represents a mixture of different materials - waste, beautiful flowers, bird feathers and was inspired by the contrast of the Zemun Quay on the Danube in Belgrade, where the artwork was created.

Video category
In the video category, a group from Slovakia won with the short video “We are Danube” created by Katarína Kováčová, Agáta Klimešová, Denis Gerža and Linda Várošová from the Design School in Bratislava. Their message is that the Danube is an important natural habitat for many animals, plays a significant role in people’s lives and creates a strong bond among the countries that share the Danube, a bond that people should appreciate and cherish.

Second place in the video category was awarded to a group of 8th and 9th grade students from Bulgaria for “Cleaning and restocking with baby trouts of Bely Vit river for a healthier Danube”. The creators are Victorya Petrova, Borislav Christov, Ralitsa Boteva, Eleonora Lyubomirova, Ivan Ivanov, Ralitsa Toneva, Kalinna Naidenova, Radosvetta Krassimirova, Ralitsa Stoyanova, Andrea Raikova, Tsarinna Nickolova, Victor, Nickol Atanassova from the Eco-club “Green Ideas for Tourism” at Georgi Benkovsky Comprehensive school in Teteven.
Third place was awarded to Germany. A team of international School exchange students from Anton-Bruckner-Gymnasium in Straubing, Germany and Brucknergymnasium Wels, Austria won for their video, “Donauforscher”, which deals with the subject of water pollution by microplastics.

The Danube Art Master Competition
On the International Danube Day on 29 June 2018, the “International Danube Art Master 2018” competition was announced. The theme of the competition was based on the motto of the year’s Danube Day – “Get active for a healthier Danube” - the second of the three pillars of the Danube Declaration 2016, advocating cleaner, healthier, safer waters for everyone to enjoy.
The competition encourages children to think about the value and importance of their local rivers, environments and the Danube River Basin specifically. Entrants must use materials from those environments to create artworks that present the water situation of their respective countries.

The competition was jointly organized by the ICPDR and the Global Water Partnership Central and Eastern Europe (GWP CEE), an ICPDR observer organisation and one of the largest networks focusing on water in the world.

“Danube Art Master 2018 witnessed the participation of 13 countries sharing the Danube River Basin. This competition is a golden opportunity for children and teenagers to demonstrate their deep connection with the Danube and a reminder for us adults of our duty to protect it for generations to come” said ICPDR Executive Secretary Ivan Zavadsky about the competition.

International Commission for the Protection of the Danube River (ICPDR)
The International Commission for the Protection of the Danube River (ICPDR) is an international organization comprised of 14 cooperating states and the European Union. Since its establishment in 1998, the ICPDR has grown into one of the largest and most active international bodies for river basin management in Europe. The ICPDR deals not only with the Danube river itself, but with the entire Danube River Basin, including its tributaries and the ground water resources. The ultimate goal of the ICPDR is to implement the Danube River Protection Convention (DRPC) and generally ensure that the river is in adequate condition. In this role, it promotes sustainable and equitable water management, including conservation, improvement and rational use of waters for the benefit of the Danube River Basin countries and their people. The ICPDR pursues its mission by making recommendations to improve water quality, developing mechanisms for flood and accident control, establishing standards for emissions and by assuring that these are reflected in the Contracting Parties’ national legislations and applied in their policies.