On Tuesday 12 and Wednesday 13 December 2017, the ICPDR held its 20th Ordinary Meeting in Vienna. Beside the heads of delegation and representatives of 13 of the contracting parties to the ICPDR, around 85 participants from all Danube countries, observers and invited guests attended this important event. 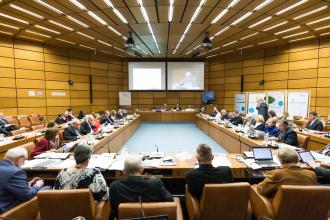 Held at the UNOV, the Ordinary Meeting was chaired by the 2016 ICPDR President Peter Gammeltoft.

During the meeting, in addition to reports from the ICPDR Expert Groups and discussions on activities for this over the coming years, the following topics were highlighted as part of the upcoming ICPDR agenda:

The ICPDR Sturgeon strategy
The ICPDR recognises the fact that Danube sturgeons are “living fossils”, representing a natural heritage of the Danube River Basin and has endorsed Danube sturgeons as a flagship species to advance broad public awareness and political commitment for them and the ecosystem of the Danube River Basin in general. A first version of such a comprehensive draft “ICPDR Sturgeon Strategy” has been prepared highlighting ICPDR’s key competences in Danube sturgeon conservation activities and concrete actions along with outlining ICPDR’s Sturgeon Communication Strategy for raising awareness by defining target groups and key messages.

Different Priority Areas of the EUSDR are relevant for the work of the ICPDR. Next to the Priority Areas dealing with Navigation (PA 1a) and Energy (PA 2), specifically Pillar B of the Strategy (Protecting the Environment in the Danube Region – PA 4, 5 and 6) includes many actions and projects which are important for or carried out in the framework of the ICPDR Expert Groups in charge of River Basin Management (RBM EG) and Flood Protection (FP EG).

Preparation for the fourth Joint Danube Survey
The Joint Danube Survey (JDS), one of the biggest river expeditions in the world is a key ICPDR activity. Three JDS were carried out so far, respectively in 2001, 2007 and in 2013. During those expeditions, research ships and dozens of scientists embarked on an intense, six week sampling tour along the Danube and major tributaries. The 2018 edition, the 4th Joint Danube Survey is taking a new turn, giving more responsibility to the countries of the Basin. JDS4 has the key objective of producing comparable and reliable information on selected water quality elements for the whole of the length of the Danube River including the major tributaries on a short-term basis and providing an opportunity for harmonization and training in Water Framework Directive related monitoring. The outcomes of the JDS4 should cover the information gaps as necessary for the 2021 update of the Danube River Basin Management Plan.

The 20th Ordinary Meeting was also an opportunity for incoming 2018 President Helge Wendenburg to present the three main priority areas of the 2018 German Presidency of the ICPDR:

The handover ceremony of the ICPDR Presidency will take place on 24 January at the House of the European Union in Vienna.

An addition to the Ordinary Meeting was the Award Ceremony of the Danube Art Master 2017 competition. The 14-country Danube Art Master contest challenged this year again children living in the Danube Basin to create sustainable works of art dedicated to their rivers. This international school competition, created at the initiative of the ICPDR as part of Danube Day, this year crowned the international winners at the Ordinary Meeting. A special video category was introduced and the winning works were shown during the ceremony.

Photos of the 20th Ordinary Meeting are available in the gallery below.
Photo credits: ICPDR/Ouriel Morgensztern
Source and Editorial: ICPDR