On 6 and 7 December 2016 the ICPDR held its 19th Ordinary Meeting in Vienna. Beside the heads of delegation and representatives of the 15 contracting parties to the ICPDR, about 60 participants from all Danube countries, observers and invited guests attended this important event. 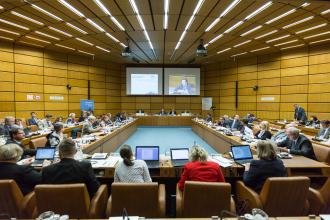 Held at the UNOV, the Ordinary Meeting was chaired by the 2016 ICPDR President Peter Kalas. The meeting focused on water management and flood management issues.

With the support of the EU strategy for the Danube Region, numerous projects were launched related to these important issues and where the ICPDR plays a role of facilitator and platform for dialogue. Given the experience and lessons learned in the past few years,
droughts were also at the core of discussions.

During the meeting, in addition to reports from the ICPDR Expert Groups and discussions on the activities for this and the upcoming years, the following topics were also highlighted as part of the upcoming ICPDR agenda:

The Mixed Environment Transport External Expert Team (METEET) activity, on Integrated Planning of Inland Waterways Transport (IWT) Projects, led by the ICPDR together with the Sava Commission and the Danube Commission is starting to organise the knowledge base for a unique exercise which aims at
providing advice to competent authorities in developing sustainable strategies, plans and projects in the field of inland navigation in the Danube taking into account European Environmental Legislation from the beginning of the drafting process in order to analyze impact,
constraints and possible mitigation and compensation measures at a very early stage. The work of METEET work will be guided, supervised and managed by a Steering Committee composed of representatives from the DC Secretariat, ICPDR Secretariat and the European Commission services (DG MOVE, DG ENV and DG REGIO).

The ICPDR Adaptation Strategy to climate change is an important document that provides background information and framework conditions relevant for the adaptation of water-related sectors in the Danube River Basin (DRB) to climate change.
The original document was adopted by the ICPDR in 2012 and the results presented were taken into account for the elaboration of the Danube River Basin Management (DRBM) Plan – Update 2015, where specific chapters on climate change adaptation are included.
At the Danube Ministerial Meeting in February 2016, Ministers appreciated the ICPDR Strategy on Adaptation to Climate Change and its integration into the updated DRBM Plan and the DFRM Plan, and formally asked the ICPDR to foresee an update of its strategy, in particular with regard to its knowledge base, in 2018.
This work will serve as a foundation for the preparation of the updated strategy in time for the next planning cycle of the EU Water Framework Directive and EU Floods Directive. The updated documents with the latest scientific findings is thus expected for early 2018.

A key ICPDR activity is the Joint Danube Survey. Research ships and dozens of scientists go every six years on an intense, six week sampling tour along the Danube and major tributaries; this make the Joint Danube Surveys the world’s biggest river research expeditions. So far, three JDS were carried out:
the first in 2001, the second in 2007, JDS3 is ongoing and based on sampling done in 2013.
Following the successful Joint Danube Survey 2013, a comprehensive overview of the state of the Danube was obtained; the preparations plans for next survey scheduled for 2019 have now started and will provides one of the foundations for the monitoring activities of the 2021 update of the Danube River Basin management plans.