On 8 November 2017, Adina Vălean, Chairwoman of the ENVI Committee at the European Parliament invited to a relaxed social gathering and exhibition under the Motto “Our Danube” on the occasion of the EU Presidency of the ICPDR. 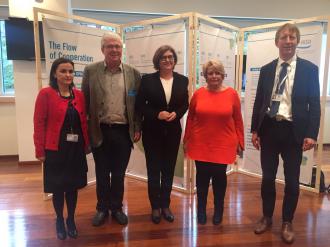 The social event took place at the Press Bar of the European Parliament in Brussels where guests were invited to celebrate the achievements of the ICPDR and its work, which directly contributes to making the waters of the Danube River Basin cleaner, healthier and safer waters for all citizens to enjoy! Following the Opening speech by Chairwoman Vălean, Joanna Drake, Deputy Director General of DG Environment, and Jean-Pierre Halkin, DG REGIO Head of Unit for Macro-regional Strategies, as well as Ambassador Luminița Odobescu, Permanent Representative of Romania to the EU, took the floor to praise the work of the ICPDR for the Danube River Basin and for Europe in general. They also thanked the organization for its work in improving the quality and safety of waters in the basin. In his address, ICPDR 2017 President Peter Gammeltoft reviewed his 2017 Presidency of the ICPDR and invited all attendees to visit the exhibition created for this event.

The exhibition, a highlight of the get-together, highlighted over three folding partition screens, the different aspects of the work of the ICPDR since its establishment.
The partition screens showed on both sides the six main areas of focus: