With its Sturgeon Strategy, adopted in December at the ICPDR Ordinary Meeting (now available for download), the ICPDR is contributing to the effort ensuring the survival and recovery of sturgeons in the Danube River Basin. A first follow-up step is the organization of a Sturgeon Conference under the upcoming Austrian EU Presidency next July in Vienna. The event is organized jointly by the ICPDR and the Austrian Federal Ministry for Sustainability and Tourism (BMNT). 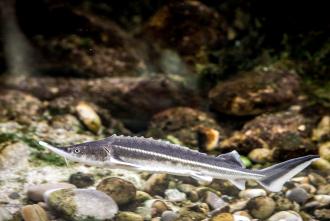 Sturgeons are among the oldest and largest fish still living in freshwaters and an integral part of the natural and cultural heritage of Europe. However, in recent years they have become a threatened species and are now almost extinct. Urgent and sustained intervention is needed to preserve sturgeons in the European Union. This includes an array of actions such as removing barriers blocking their migration, stopping the loss and deterioration of habitats and halting or mitigating other negative impacts such as pollution, overexploitation and trafficking. Immediate measures need to be taken to save sturgeon populations from extinction by establishing living gene banks and conservation stocking.

The ICPDR Sturgeon strategy provides a comprehensive overview of actions and measures considered necessary by sturgeon specialists towards securing the survival of sturgeons within the scope of the competences of the ICPDR and fostering synergies and cooperation with all national and international players dedicated to sturgeon conservation activities.

Save the Date: Sturgeon Conference on 9-10 July 2018 in Vienna
Under the banner of its Presidency of the European Union, the Austrian Federal Ministry for Sustainability and Tourism (BMNT) is jointly organizing a Sturgeon Conference with the ICPDR  on 9-10 July. The event will allow for a stocktaking on the state-of-play and discussions on the concrete actions needed to safe and reintroduce this iconic species in Europe.

Sturgeons - A species on the brink of extinction
Originating 200 million years ago this ancient migratory fish can grow up to seven meters in length and can live to be a hundred years old. Once present in large, viable populations in many rivers and adjacent coastal areas of the European Union sturgeons have now either completely disappeared or declined very dramatically over the past century. Considered to be of particular social and commercial importance, sturgeons and their survival have become a continent-wide concern in Europe.

The largest stock of the sturgeon population in the European Union still living in the wild can be found in the lower Danube Catchment; all surviving stocks share the status of critically endangered species and their survival depends on imminent action. Today sturgeons belong to the most threatened species on the IUCN Red List.

The ICPDR Sturgeons Strategy is available below for download.