Vienna, 10 July 2018 (Press Release) - An international event took place on 9th and 10th July in Vienna within the framework of the Austrian Presidency of the EU. In attendance were 50 experts from national administrations, EU and international institutions, academia and NGO representatives, who can all potentially provide the long-term framework of action indispensable for the conservation of sturgeon stocks in Europe. 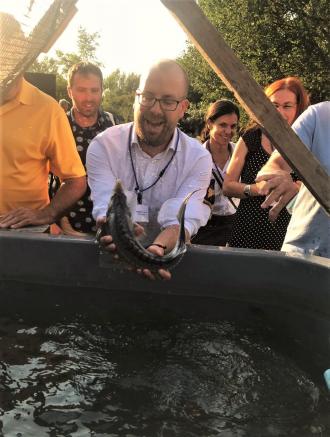 The overall objective of the Conference – jointly organised by Austria in the framework of the Austrian EU Presidency and the International Commission for the Protection of the Danube River (ICPDR) – was to raise awareness to the challenges in place and to trigger comprehensive action for sturgeon conservation and restoration in the Danube Basin as well as at Pan European level.

The sturgeon is considered to be a "living fossil" and is one of the largest and oldest freshwater fish in Europe. Today, 85 per cent of sturgeon species are threatened with extinction. High-ranking experts from all over the world met in Vienna to discuss the transnational protection of this iconic species in the Danube. The conference was jointly organized by the Austrian Ministry of Sustainability and Tourism and the ICPDR as part of the agenda of the Austrian Presidency of the EU.

Just as in other parts of the world where endangered species such as rhinoceros and tigers need to be protected, it is equally important to ensure the sustainable livelihood of one of Europe’s most endangered species – the sturgeon. This unique fish is extremely sensitive to environmental conditions and is therefore considered to be a good indicator of a healthy river system. The sturgeon plays a central role in the activities of the ICPDR and has become its flagship species. It is considered to be of great technical importance and is subject to targeted communication measures including a number of activities that take place as part of the annual Danube Day.

Sturgeons have existed on Earth since the time of the dinosaurs and have been living in fresh water for over 200 million years. The European Huso huso, also known as the Beluga sturgeon, can reach up to 8 meters in length and weigh over 2,000 kg. In comparison, the average weight of a car is just 1,400 kg.

Due to the intensive use of our rivers and streams and the construction of structures such as hydropower plants and flood protection measures, sturgeons are prevented from migrating to their natural habitats and spawning grounds, thus affecting their continuity as a species. The Beluga sturgeon’s caviar is one of one of the world's most expensive delicacies and overfishing therefore also poses a major threat to its survival.

There is only one other wild sturgeon species in Austria, the sterlet, which can only be found in a very small area of ​​the Danube. An internationally acclaimed LIFE-Sterlet project is currently running, with the aim of strengthening the wildlife population of the species and re-establishing healthy populations.

The Conference focussed on the elaboration of key messages to decision makers in all relevant institutions as a basis for shaping future actions and the way forward for sturgeon conservation to save sturgeons from extinction. Out of the wealth of information received and by incorporating voices from all over Europe, Canada and United States over the two days of the European Sturgeon Conference, Key Messages were identified which will serve as a basis for urgently required follow-up sturgeon conservation activities across countries and sectors on all relevant levels. These Key Messages can be accessed here.

All presentations, agenda and related documents as well the Key Messages of the Conference are available for download.