On 23-25 October 2017, the Italian Ministry for Environment, Land and Sea organized the International Summit "Water and Climate: Meeting of the Great Rivers of the World" in the historic and prestigious Campidoglio of Rome. Managers and representatives of the most important river basins of the world were invited to discuss the future of water in view of increasing threats by climate change and its dramatic consequences. ICPDR President Peter Gammeltoft presented the view of the ICPDR. 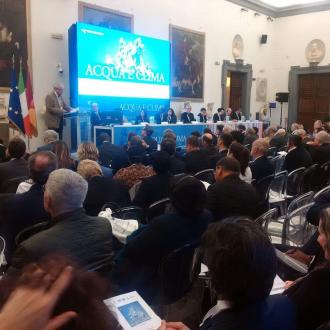 The Summit was organised by the Italian Government (Ministry of the Environment), the UNECE (United Nations Economic Commission for Europe), the International Network of Basin Organizations (INBO, Secretariat of the Global Alliances for Water and Climate) and Aquamadre.  Representatives of Governments and of International Organisations and Multilateral Development Banks were also among the participants. From Europe, participation included Commissioner Vella, a representative of the Joint Research Centre (JRC), a number of representatives of national governments, the European Investment Bank (EIB) and the River Basin Commissions of the Danube, the Rhine, the Meuse, the Scheldt and the Seine.
The main goal of the event was to draw international political attention to the need to accelerate action on water and climate adaptation, inter alia to stem the migratory flows from Africa and the Middle East to Europe. In this perspective, representation of countries of the southern and eastern Mediterranean and sub-Saharan Africa was significant.

The summit promoted further integration of water as one of the priority issues of international negotiations on climate change. It enabled experience-sharing between great river basin organizations, local, national and regional administrations in charge of climate change adaptation policies and water resources management, bilateral and multilateral donors and other institutions interested in adaptation to climate change and basin management. The “Water and Climate Summit” was designed as a milestone in the preparation of the 23rd Conference of the Parties to the United Nations Framework Convention on Climate Change (COP23) to be held in Bonn, Germany on 6-17 November.
The first part of the Summit was officially opened by Italian Prime Minister H.E. Paolo Gentiloni. The opening was followed by speeches of dignitaries and high level speakers, among whom a representative of the Pope, the Italian Environment Minister and Prime Minister, the Mayor of Rome, EU Commissioner Vella and a number of other dignitaries from international organisations and African and Mediterranean countries. In the second part of the summit, River Basin Organisations of some of the major river basins in the world (Europe, Africa, Latin America, North America, Asia and Australia) took the floor for statements. The remainder of the summit was dedicated to thematic sessions on the following topics:

​​​​​​​ICPDR 2017 President, Peter Gammeltoft represented the ICPDR at the Summit. He made a statement on behalf of the ICPDR outlining how the Danube Basin is expected to be impacted by climate change. Mr. Gammeltoft then presented the ICPDR Climate Adaptation Strategy that will be regularly updated and how climate change adaptation has been integrated in the Danube river basin and flood risk management plans.

In order to contribute to a wider political debate about the need for effective climate adaptation, the ICPDR President also highlighted a few important aspects of water resources management in view of climate change adaptation. He emphasized the need for river basin management and where relevant the establishment of international River Basin Organisations. Gammeltoft concluded with  the need to accelerate investment in water infrastructure and for better integration of water policy objectives in other policies such as agriculture, energy and transport if we realistically are to attain the UN Sustainable Development Goals (SDG). In his address, Mr. Gammeltoft quoted a figure from McKinsey from 2013 showing that investments totaling 12 Trillion US Dollars would be needed for traditional“grey”water infrastructure alone (drainage, drinking water and sanitation) until 2030. This would translate into 12 times the cost of the 2008 bank bailout. Thus, current levels of availability and uptake of finance for investments in water management are completely inadequate. As ICPDR President Gammeltoft explained to the audience, “the SDGs would likely not be attained and adaptation to guarantee the welfare of populations cannot not be accomplished without a very significant increase of investments in the way we manage and use water.”
The closing ceremony, on 25 October, was celebrated in the presence of the President of the Italian Republic, H.E Sergio Mattarella.

Read more on the outcomes of the Summit, please visit the event website.