The Republic of Serbia covers an area of 88,499 km² and includes two provinces: Vojvodina (21,614 km²) and Kosovo and Metohija (10,910 km²); the latter being currently under an international protectorate. Approximately 92% of the country lies within the Danube Basin (accounting for 10% of the total Basin). Of this land, 30% is forested. With more than 90% of Serbia’s renewable water resources originating from outside national territory, international cooperation on water issues is crucial for sustainable water management. 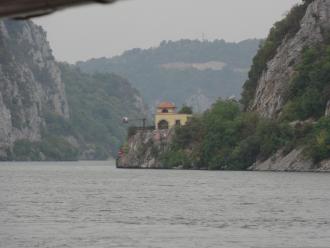 The Republic of Serbia is a legal successor of the FR Yugoslavia/Serbia and Montenegro that ratified the Danube River Protection Convention on 30 January 2003, becoming a full member of the ICPDR in August 2003. As an EU candidate country, Serbia is harmonizing its legislative system with EU water legislation, and is in a process of preparation of first River Basin Management Plan for the territory of Serbia, in accordance with EU Water Framework Directive.

The relief of Serbia is diverse. The northern region is a part of the Pannonian Plain, crossed by rivers (the Danube, Sava, Tisza, Tamiš, Begej, etc.), numerous canals of the Danube-Tisza-Danube Hydrosistem and some lakes. To the south of the Danube, the terrain is hilly and mountainous and can be sub-divided five-fold: the Rhodope Mountains (northern, central and southern Serbia); the Carpathians (in the north-east); the Balkan range (extending across the east and south); the Dinarics (in Metohija); and the Skardo-Pind mountains (of Kosovo and Metohija).

Serbia is rich in Quaternary, Neogene and karstic groundwater. There are 6 hydrogeological entities in Serbia: Bačka and Banat; Srem, Mačva and Posavo- Tamnava; and the South-western; Western; Central; and Eastern regions.

In the territory of the Republic of Serbia, the protected area status has been assigned to 460 natural resources: 5 national parks, 17 nature parks, 20 special landscape areas, 68 nature reserves (strict and special), 309 natural monuments (botanical and dendrological, geomorphological, geological and hydrological) and 3 protected habitats. The total surface of the protected areas is 583,183 hectares, accounting for 6.6% of the country’s territory. International protection has been granted to ten areas included in the List of Ramsar Wetlands, with the total surface area of 63,919 hectares, as well as to one area included in the List of Biosphere Reserves under the UNESCO Man and Biosphere Programme, with the total surface area of 53,800 hectares. Under relevant international programmes there are 42 identified Important Bird Areas, 61 Important Plant Areas and 40 Prime Butterfly Areas in Europe.
The EMERALD network, under the Convention on the Conservation of European Wildlife and Natural Habitats, covers 61 areas with the total surface area of 1,019,270 hectares, which translates to approximately 11.5% of Serbia’s territory.

Several international Ramsar sites have been selected including:

The main uses of Danube waters in Serbia are for domestic and industrial water supply, irrigation, navigation and cooling of thermal power plants.

Land and climate conditions are highly conducive to agriculture. Agricultural land covers some 57% of the territory of Serbia. Until the late 1960s, the economy was dominated by agriculture. With the industrialization that followed came migration to larger industrial, administrative, educational and cultural centres.

The population today is 7,498,00 - excluding Kosovo and the Metohija Province (2002) - with the main river valleys being the most populated and developed regions. These house the major traffic and energy supply corridors and most key cities including Belgrade, Niš and Novi Sad. The main uses of Danube waters are domestic and industrial water supply, irrigation, navigation and power plants, plus they also act as receiving waters for wastewater effluents.

Groundwater is the primary source of municipal and industrial water supply, with a total municipal abstraction of ca. 750 million m³ in 1991. Industrial water supply in 1991 was ca. 615 million m³ and 175 million m³ was used for irrigation (less than 3% of agricultural land is irrigated; levels continue to decline). Hydropower is a significant power generator and water consumer in Serbia accounting for 31% of total production in 2004 (11,021 GWh). There are 13 major reservoirs greater than 10 million m3 dedicated to energy production (e.g. Iron Gate I).

The basic elements of the 1700 km inland waterway network comprise the Danube, Sava and Tisza rivers, plus the network of canals and canalised rivers of the Danube-Tisza-Danube (DTD) system. All are directly or indirectly connected with the Danube, and thus with the European inland network. The Serbian Danube is usually divided into upper and lower sections. The first, covering the stretch from the Hungarian border (km 1433) to Belgrade (km 1166), comprises a near-natural hydrologic-hydraulic regime. The second sector from Belgrade to the Bulgarian border (km 845) is located mainly within the Iron Gate I and II complex, offering excellent navigation.

is also a pressing issue in the Republic of Serbia, due to frequent high waters on many of its watercourses. The activities on further improvement of flood protection system are underway. Smaller rivers are also prone to torrents, with frequent flash floods and landslides; control measures are only partially developed.

Overall pressures on surface and groundwater can be considered as high to very high and are a reflection of a general conditions of infrastructure, economy and overall societal attitude towards environmental protection and capacity of the society to take protective and preventive measures. In general, this part of water sector will need highest investments in the future in order to achieve the objectives of the WFD and other related Directives. Municipal sources continue to be dominant sources of pollution over time. Only few industrial facilities perform pre-treatment of technological wastewater before it is released into sewerage networks or other recipients. Existing data indicate the largest polluters are the food industry (mostly organic emissions) and chemical, metal processing industries, etc. (specific pollutants).
Agricultural sources of pollution are dominated by livestock farming with limited and relatively small contribution of the loads on surface and groundwaters coming from mineral fertilizer use on productive agricultural lands of which only a minor portion is irrigated. This is a consequence of farm size and structure which is dominated by small holding subsistence farms (average farm size in the country is < 5 ha). In summary, pressures on surface and ground water in Serbia are dominated by municipal and industrial sectors and point sources.

Pressure on surface and ground waters from non-point sources of pollution still remain relatively low with the exception of few distinct locations under the influence of known major sources of pollution but it is noted that septic tanks in unsewered communities do represent an issue of concern at the local scale with respect to ground water resources.

In general, it can be said that HYMO pressures in Serbia represent just as significant problem as do pollution pressures and at some locations probably even more significant. Probably the most significant HYMO pressure is the result of diversion mini hydropower plants being aggressively pursued at many locations and small streams in the mountainous parts of Serbia as these streams are most sensitive to HYMO pressures if appropriate rules and guidelines on flow diversion are not followed.

For more detailed information and statistics on the above, as well as key web links and reports, download the fact sheet below.

Approximately 90% of all Serbia’s accessible water originates from outside its territory. International cooperation on water issues is thus vital for Serbia.