The Danube is very significant to Romania, since the country is located almost entirely within the Danube River Basin. The Romanian section covers almost a third of the surface area of the Basin, and over a third of the river’s length flows through the country. Crucially, the Romanian (and also Ukrainian) Danube is the end carrier of all wastewater discharges into the Black Sea. 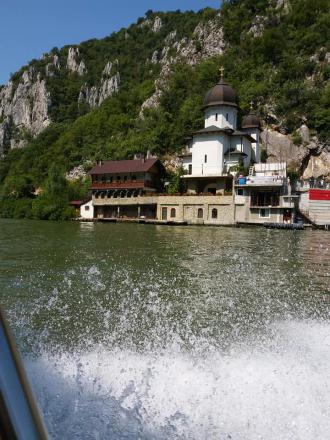 Romania is located almost entirely within the Danube River Basin, covering 238,397 km² and has a population of nearly 19.5 million inhabitants. The Romanian section spreads out over almost a third of the surface area of the Basin and over a third of the river’s length flows through the country. Crucially, the Romanian (and also Ukrainian) Danube is the end carrier of all wastewater discharges from all countries into the Black Sea.

With 97.4% of Romania situated within the Basin, the Danube has played a major role in shaping the country. Romania’s relief is split threefold: 31% mountainous; 36% hills and plateaus; 33% plains and meadows. It is a concentric display of these 3 relief units, arranged in a ring and amphitheatre structure. The Carpathian ring is part of the Alpine chain, connected to the Alps in the west and the Balkans in the south. Beyond this and Transylvanian Depression which skirts around it, are hills, tablelands and the Dobrogea Plateau, plus the plains of the Lower Danube and Banat–Crisana. Romania’s climate is mild, temperate-continental with four distinct seasons, most precipitation in the warm season and some Mediterranean influence to the south.

Yearly precipitations have an average of 637 mm which decrease in intensity from west to east, from over 600 mm to less 500 mm in the East Romanian Plain, to about 350 mm by seaside, but in the mountainous areas they reach 1000-1500 mm. Severe drought occurs every 15–25 years. Romania is poor in water resources, ranking 13th in Europe with only 1,700 m³/inhabitant/year. 6.1% of Romania (14,437.3 km²) has been designated for the protection of habitats/species , when only taking sites where the status of the water resource is a key factor.

Romania has considerable land resources; 62% of which are agricultural, 27% forest, 3.7% waters and 6.9% other uses (2000 data). At 0.6 and 0.4ha respectively, its share of agricultural and arable land per capita is significant and is unevenly spread, with the highest proportion in the plains (80+% agricultural). The major cities are Bucharest (1,929,615 residents), Constanta (Black Sea port), Iasi, Timisoara, Cluj-Napoca, Brasov, Craiova, Ploiesti and the Danube ports of Galati and Braila.

In reference to point source discharges, 359 significant pollutions have been identified at the basin level, accounting for 80% of total discharges recorded. In 2004, 13,034 tonnes of nitrogen (N) and 3,399 tonnes of phosphorus (P) were released, 98% and 85% of which derive from settlements. Agro-chemical fertilisers are the main source of diffuse discharges. With regard to Priority substances, 582 industrial units have been inventoried as discharging dangerous substances into water resources /sewage systems (2001 data).

The status of the Danube River, Delta and Romania’s coastal waters depends considerably on pollutant inputs from upstream countries (particularly for N and P loads). Diffuse agricultural sources, especially chemical fertilizer use in upstream countries and the improper working of wastewater treatment plants in Central and Eastern Europe is a major input.

For more detailed information and statistics on the above (including impacts of pollution and hydro-morphological alterations to the Danube system and mitigation measures), download the fact sheet below.

The Danube River Protection Convention (signed in Sofia in 1994) was developed from a Romanian government initiative dating from 1985 (the Bucharest Declaration).