Montenegro, literally meaning the “black mountain”, is a small upland country. Just over half of its territory lies within the Danube River Basin, the remainder being in the Adriatic Sea catchment. Notable Danube rivers are the Tara, Piva, Lim and Ćehotina and the Ibar. In October 2008, the Convention on Cooperation for the Protection and Sustainable Use of the Danube River came into force in Montenegro. 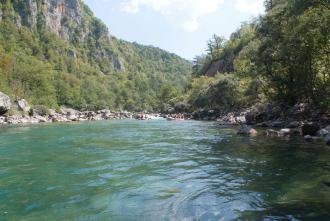 Montenegro has a diverse landscape including some of the most rugged terrain in Europe. The country is famous for its dramatic gorges, fast-flowing rivers, karst scenery, numerous lakes and coastline. The majority of the terrain is mountainous with high ranges to the north (the most ice-eroded area of the Balkan peninsula), but with large karst areas in central and western parts and areas of flat land and coast to the south.

The climate is also diverse with continental, maritime and orographic influences. Large lakes, a deeply indented coastline (at the Bay of Kotor) and mountain areas close to the coast add to the complexity. A Mediterranean climate exists in southern areas and the Zetsko-Bjelopavlićka Valley. A more severe climate occurs in the large karst valleys located 40-80 km from the Adriatic and also in areas closer to the sea where land is separated from the coast by mountains. Central and northern Montenegro has certain characteristics of a mountain climate but with a moderating influence from the Mediterranean, reflected in higher precipitation levels. In the very north, the climate is continental, but again with relatively cold and humid summers and long cold winters in the mountain areas. Indicators suggest the climate has warmed in recent decades.

Montenegro experiences high river discharge levels, with an average total of 40 l/s/km2 and, as such, is in the top 4% of the world’s territory in terms of average outflow. Given that 95% of Montenegrin watercourses are formed within the country, it could be said that water is Montenegro’s biggest natural resource. 52% of the country (7,251 km2) contains rivers, which eventually find their way to the Danube (to the north), while the remainder of the country’s rivers flow to the Adriatic (to the south).

Montenegro has an abundance of high quality underground and surface waters. Hydropower is the country’s most important energy resource and Montenegro is ranked high in terms of availability of hydropower resources. Environmental protection requirements and seismic risks reduce its utilisation and, at present, only 17% of the potential resources are being exploited. Increasing use requires careful handling; hydropower should be viewed as only one element in a mixed energy supply scenario. Regarding the use of water in industry, mining and thermo-energy facilities, 60-142 million m3 of water was used per year (1978-1993 data). Due to economic sanctions and the reduced operation of many industries, total water use has reduced significantly in recent years: in 1996, total industrial water use was approx. 55 million m3/year.

Considering flood risk, floodwater potentially threatens 24,500 ha of farmland and urban areas. This is particularly pronounced in areas surrounding Lake Skadar and the Bojana River, Zeta Valley, Bjelopavlici, Plav ravine and areas around the Lim, Tara and Cehotina river valleys. Most of the existing land reclamation systems are currently not operational. Large floods hit central and northern parts of the country (specifically the upper Tara and Lim regions) during the last century (e.g. 1963 and 1979 and again in 1999 and 2000). The need for flood protection measures is particularly apparent in those areas near the larger rivers (the Morača, Lim, Tara, Cehotina, Ibar and Bojana) and the large flat karst plain areas. Work completed to date on river regulation and flood protection is modest, mainly of local importance, and not adequate in size and functionality.

The water quality of rivers, lakes, sea and groundwater is considered satisfactory. Prevailing pollutants in Montenegro are mainly the result of wastewater from point sources – settlements and industry. The quality of groundwater in natural conditions is classified as class I for the majority of the year (with the exception of coastal aquifers influenced by the sea). On the mainland, the quality of waters in aquifers of inter-granular structure is jeopardized only in a few locations, downstream from large settlements and industry.

For a long time, this sector has been characterised by a lack of investment. For more detailed information and statistics on Montenegro, as well as key web links, download the fact sheet below.

The mountainous area north of Kotor Bay is considered to be the rainiest area of Europe, with annual precipitation levels of 4600 mm. Levels on the steep slopes of the Orjen in Crkvice (940m) reach 5000 mm/annum and in peak years almost 7000 mm/annum!